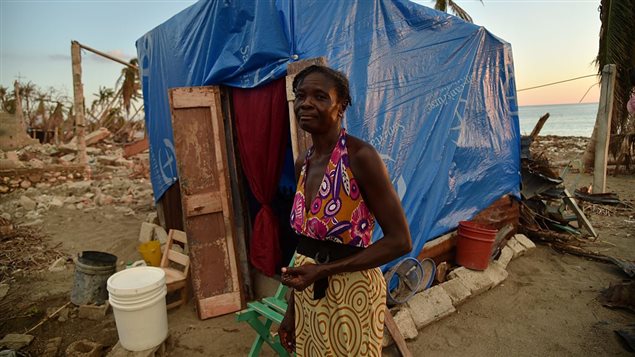 Anne Marie looks on next to her shelter, built with metal, wood and plastic tarpaulin, in the place where was her house was destroyed by hurricane Matthew, in the commune of Coteaux, southwestern Haiti, on November 4, 2016.
Photo Credit: HECTOR RETAMAL

A month after Hurricane Matthew struck Haiti, killing hundreds of people and destroying thousands of homes, only about one third of the urgent humanitarian appeal launched by the United Nations has been funded, according to international NGOs.

Last month, the UN launched a $120 million appeal to meet the most urgent humanitarian needs. But to date only 32 per cent of the UN appeal has been funded, officials with CARE said.

The charity itself has only been able to secure 16 per cent of its fundraising target, CARE officials said.

“The lack of funding for a disaster of this caliber is concerning,” Jean-Michel Vigreux, CARE country director in Haiti, said in a statement. “Lives are on the line here.”

Nearly 1.5 million people in Haiti are in dire need of assistance, according to CARE.

Food is the biggest need.

Matthew destroyed people’s crops and livestock when it ripped through the southern parts of Haiti, the breadbasket region of the Caribbean nation.

There are now 800,000 people in urgent need of food, with nearly half of those in the Grand’Anse Department, according to CARE.

Aid workers in southwestern Haiti have been working around the clock for the last month to distribute food and tarps to thousands of survivors of Hurricane Matthew, said Canadian Laura Sewell, a project coordinator with CARE in Haiti, who recently returned from the Gran’Anse Department.

(click to listen to the full interview with Laura Sewell)

Over the last month, CARE has distributed nearly 85,000 hot meals and will soon begin providing seeds for the planting season, which begins in two weeks, she said in a telephone interview from Port-au-Prince.

The charity has also provided cash transfers for people to purchase food in the local market, Sewell said.

“More assistance is needed though before Haiti has a major food crisis on their hands,” said Vigreux. “The needs are truly startling, and only going to increase until more funding is there to provide the aid needed for people to survive and start getting back on their feet.”

Canada has so far provided over $6 million dollars for the humanitarian response to Hurricane Matthew.

Finding permanent shelter for over 140,000 people who have found refuge in temporary shelters is another huge priority, CARE officials said.

Since the hurricane, CARE has distributed over 6,000 heavy duty tarps for emergency shelter, and is planning to reach 40,000 people with tarps and corrugated iron sheets for repairing their homes.

It continues to rain quite heavily in the affected areas and people whose houses have been destroyed by the hurricane continue to sleep outside, Sewell said.

“Tarps can help people to at least stay dry while they are rebuilding their houses,” she said.

The charity is also distributing sanitation kits and water purification tablets to try to stem the spread of cholera, Sewell said.

“So many people have literally lost everything, but they are eager to rebuild their lives,” said Vigreux. “They just need the resources to get them started.”

Sewell said there are some hopeful signs. Green leaves torn from trees by hurricane-force winds are starting to grow back, she said.

“I think it’s starting to show the general sense of recovery and people really working to start rebuilding their houses.”