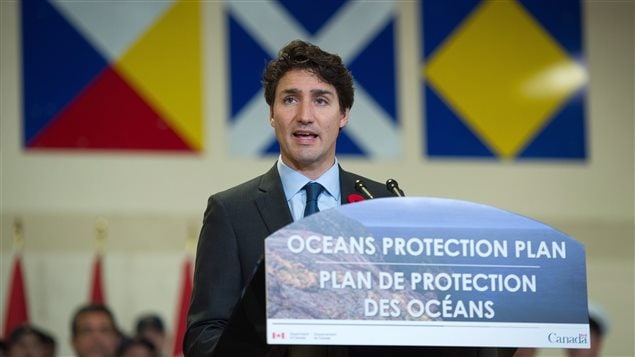 The federal government will invest $1.5 billion in an ocean protection strategy to safeguard the Pacific, Atlantic and Arctic oceans and make Canada a world leader in protecting coastlines, Prime Minister Justin Trudeau announced today in Vancouver.

The five-year funding program will protect Canada’s three oceans and coastline from “the damage that comes from shipping and pollution,” Trudeau said. It includes creating a marine safety system, restoring marine ecosystems, and spending on oil spill cleanup research and methods.

It also creates stronger partnerships with Indigenous and coastal communities, Trudeau said. The plan meets or exceeds international standards set by such pioneers in ocean protection as Alaska and Norway, Trudeau said.

Trudeau told a group in Vancouver that the funding will strengthen the Canadian Coast Guard, get tough on pollution from industry, fund coastal habitat restoration and create new legislation to increase responsibility for vessel owners.

“I want you to know that in my capacity as Prime Minister I will do my best to ensure that my kids and all of your kids get to enjoy the West Coast just as I have, just as we all have for many years to come,” Trudeau told the audience in Vancouver.

Because Canada has the longest coastline in the world, it’s vital to have a plan to ensure protection in modern and advanced ways, Trudeau said.

“Canada is blessed with some of the most spectacular coastlines in the world,” Trudeau said. “Our coasts are the traditional territory of Indigenous communities, they are habitats for rich biodiversity and precious ecosystems, and they offer an unparalleled economic, recreational and tourism opportunities.”

The announcement comes a day after a barge flipped and sank not far from the site on B.C.’s central coast where a tug ran aground last month, spilling more than 100,000 litres of diesel fuel from its tanks.

“The ongoing incident at Bella Bella is unacceptable,” said Trudeau, referring to the spill. “I know this, you know this, Canadians know this. It’s time for a change.”

The announcement also sets the stage for the possible approval of the $6.8-billion Trans Mountain pipeline expansion.

Trudeau’s government is expected to announce a decision on the project by Dec. 19.