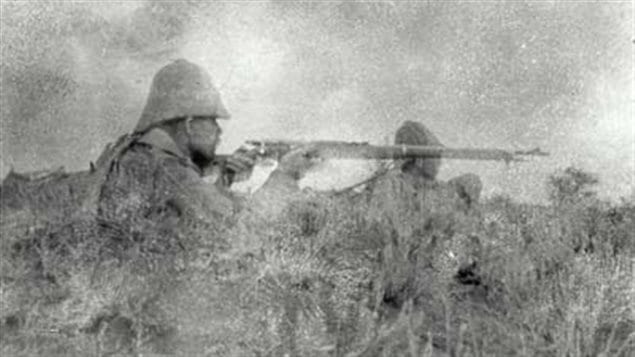 Canadians firing at the Boer trenches between 50 and 200 metres away. Possibly the first photo taken of a front line battle. Photo by J Cooper Mason, who later wrote to his family “The fire at this point was very hot,” As he took this photo a Boer bullet hit his helmet, taking the maple leaf badge off the front. He fortunately was unhurt.
Photo Credit: J Cooper Mason

One of Canada’s oldest regiments, the Royal Canadian Dragoons has for it’s regimental badge, a South African springbok.

It might seem strange for a Canadian military unit to have an African animal as its symbol, but it goes back to 1900 and an action that saw three Canadians awarded the Empire’s highest honour for valour, the Victoria Cross.

Although not accurately documented, it is said that Canadians on guard duty noticed a herd of springbok leaping as if frightened by something. They took this as a warning of a sneak Boer attack and were able to prepare and fight off the attackers.  The springbok thus became adopted as their symbol.

In early 1900,  the very young Dominion of Canada offered its help once again to Britain during the Second Boer War in far off South Africa after sending an initial force in 1899.

The group,  known as the 1st Battalion Canadian Mounted Rifles  with about 400 officers and other ranks, and over 250 horses was the second foreign military effort for Canada, still not 40 years old.

In July the Mounted Rifles were merged into the Royal Canadian Dragoons.  After several skirmishes with the Boers, the RCD’s biggest action occurred in November.

Upon closing to the enemy position on November 6, 1900, the British general realized the Boer force was much larger than anticipated and would likely be further reinforced during the night. Camping at a farm area called Leliefontein, he ordered a retreat in the morning.

As the column began the retreat a small force of about 90 RCD’s were left to fight the rearguard action, which quickly came. With two twelve pounders and a Colt machine gun, the small group faced hundreds of attacking Boers and held them off while the column retreated.

It is a pride of honour amongst artillery men that their guns not be captured, and in spite of the overwhelming odds, the guns were saved.

The main body of Boers attacked one of the 12 pounders, severely wounding Lieutenant Richard Ernest William Turner, who with help from the Colt on his left flank turned them away temporarily. As the main body passed, Turner was able to get the gun moving away.

Sergeant Edward James Gibson Holland and the Colt then came under attack, and with the gun’s horse shot, Holland grabbed the gun from its carriage and carried it to a limber making a getaway, burning his hand on the red hot barrel.

The Boers were furious to realize they hadn’t captured the gun, merely the empty carriage.

Lieutenant Hampden Zane Churchill Cockburn meanwhile continued to hold his ground delaying the attackers as his gun and the others made their escape.  The guns were used  as  Canadians continued to fight a rear-guard action until reaching higher ground where the Boers ceased their attack.

Lieutenant Hampden Zane Churchill Cockburn meanwhile continued to hold his ground delaying the attackers as his gun and the others made their escape.  The guns were used  as  Canadians continued to fight a rear-guard action until reaching higher ground where the Boers ceased their attack.

The citations for the three Canadian VC winners (of five during the war) were published in the  London Gazette of April 23, 1901.

Turner, born in Quebec City, went on to a distinguished military and post war career. In the First World War in where as a Brigadier-General, in April 1915 he played a key role in the Second Battle of Ypres.  British Prime Minister Lloyd George said, “the Canadians saved the British Army” as they held their positions against the first major gas attack, while the French on their flank fled. He was knighted in 1917 and became Lieutenant-General Sir Richard Turner  He died in 1961 at age 90.

Holland, born in Ottawa, survived the Boer War and the First World War where with the rank of Sergeant, he commanded the Borden Motor Machine Gun Battery.  Retiring from the military  after the war, he eventually became postmaster of the town of Cobalt Ontario, where he died  in 1948 at age 70.

Lt. Cockburn, born in Toronto, took part in 45 engagements during the Boer War and later became a Major in the Governor General’s Bodyguard. He moved to a ranch in Saskatchewan where he was killed in a riding accident in 1913.

Sir: I have much pleasure in forwarding attached statements on the gallantbehaviour of officers and non-commissioned officers of The Royal CanadianForces in the actions of 7th November, 1900 between Witkloof and Leliefontein on the Koomati River. I must in bringing them forward emphasize the fact that the behaviour of the whole Royal Canadian rear guard under Lieutenant-Colonel Lessard was so fine that it makes it most difficult to single out for special distinction. There is no doubt that men sacrificed themselves in the most gallant way to save the guns which they succeeded in doing.

These statements added to what I know myself enable me to bring forward five names for special distinction. The first for of them I emphatically recommend for the proud distinction of the Victoria Cross and the fifth for some mark of her Majesty’s favour.

Lieutenant H.L.C. Cockburn, of The Royal Canadian Dragoons, with a handful of men, at a most critical moment, held off the Boers to allow the guns to get away; but to do so he had to sacrifice himself and his party, all of whom were killed, wounded or taken prisoner.

Lieutenant R.E.W. Turner, later in the day when the Boers again seriously threatened to capture the guns, although twice previously wounded, dismounted and deployed his men at close range and drove off the Boers thus saving the guns.

No 185 Private W.A. Knisly, The Royal Canadian Dragoons, in a most gallant way carried out of action under heavy and close fire No 172 Corporal Pearcy R. Price, getting wounded himself in doing so.

No 176 Sergeant E. Holland, of the Royal Canadian Dragoons, did splendid work with his Colt gun. He kept the Boers off the 12 pounders by fire from his gun at close range, and then when he saw the Boers were too near for him to escape with the carriage, as the horse was blown, calmly lifted the gun off the carriage and galloped off with it under his arm.

Lieutenant E.W.B. Morrison, Royal Canadian Artillery, for the skill and coolness with which he worked and finally saved his guns.

I have the honour to be, sir, your obedient servant.