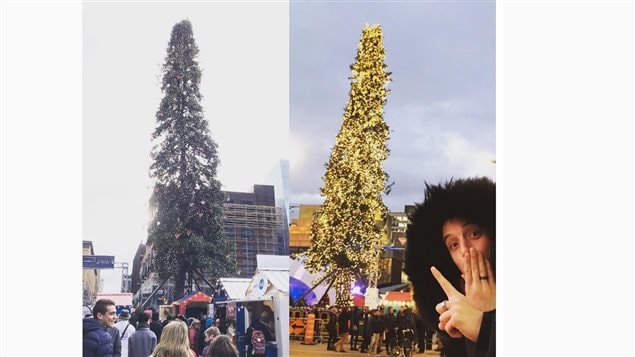 It’s Christmas, and a central attraction is always the Christmas tree, whether in the home or the city centre. It is a major symbol of the season. Indeed, In major cities across North America, a big central Christmas tree is always a highlight and a festive attraction.

Now, Canada is a land of mighty forests and soaring majestic trees, so you’d think a city like Montreal with the vast forests of Quebec, would have a big handsome tree.

Well the city wanted a big tree. In fact, it was supposed to be a statement for Montreal’s 375 anniversary year starting in just a few weeks. The idea was to get the tallest Christmas tree in North America, and certainly one taller than the one in New York which always gets lots of attention. It was hoped having a taller tree would attract some media attention on Montreal, again with a view to promoting 2017 and the city’s 375th anniversary.

Since the 1930’s New York’s tree has averaged about 22 metres, so the organizers thought that at 26 metres, the Montreal tree was a safe bet.   Ooops, this year though the New York tree was over 28 metres tall.

At 26 metres Montreal’s tree it is still quite tall but that’s about the kindest thing most people are saying about it.

The tree is old and nearing the end of its life. It’s also a little crooked, somewhat scrawny, and kind of chopped off at the top, apparently from an accident during shipping..

Comments on social media range from “it looks like Charlie Brown’s Christmas tree”, to “ugly”, “fragile”, “embarrassing” and so on.

In fact it even has it’s own (unflattering) twitter account in French, Sapin de Montreal @sapinlaid (ugly tree).

There also doesn’t seem to be much decoration to it. The tree delivery company said they didn’t have the time or the budget to do much decorating. There are lots of lights, albeit not coloured, but also lots of somewhat tacky advertising logos from a sponsor,  the general hardware chain store  ‘Canadian Tire’, but that’s about it. It’s not known how much the sponsorship money amounted to, but Tourism Montreal apparently kicked in a meager $2,500 in public money.

This might be compared with Montreal’s plan to spend $40 million dollars to put a fancy light display on the city’s Jacques Cartier Bridge in 2017 for the  city’s 375th anniversary.

Defending the tree was Sapin MTL co-founder Philippe Pelletier.  He told reporters that they never expected the controversy, adding
“ What we delivered is a natural Quebec tree, as a Quebec tree should be. People have in mind that a Christmas tree should be perfect, but that’s not the reality”.

Some people are now saying the tree is so quirky and ugly, that it’s kind of cool.