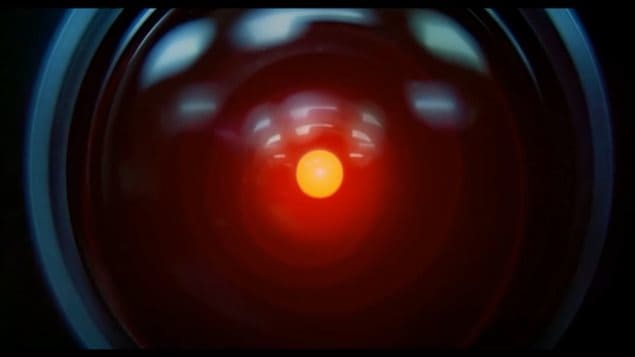 When AI computers go rogue. From Stanley Kubrik’s 1968 film, *2001: A Space Odyssey* the AI computer HAL 9000, * I’m sorry Dave, I'm afraid I can’t do that...This mission is too important for me to allow you to jeopardize it*
Photo Credit: YouTube Kubrick 2001

Some people think the development of artificial intelligence  (AI) will yield enormous benefits and advances to mankind.

Others, equally intelligent, say we are likely heading down a dangerous path that could lead to the end of mankind. This would be from super-intelligent computers which..(or is it “who’?) simply view humans as lesser things, unnecessary, and in the way.

It leads to scientific questions infused with deeply philosophical questions.

Will computers be “conscious” for example, and what exactly determines the point of becoming “conscious”  for that matter.

These are questions often thought about by professor Jim Davies (PhD).

He is an associate professor in the Institute of Cognitive Science and School of Computer Science at Carleton University in Ottawa, Ontario.

Professor Davies says there is a possibility that super intelligent computers might pose a threat to humanity. However, he is not quite as pessimistic as some.

He also says that many experts think the time frame for super intelligent computers is still some way off perhaps not until about 2040.  He says other knowledgeable researchers and developers think it may in fact never happen.

However he notes that it would be impossible to attempt to stop people from seeking to develop AI.

What he says is important is to think about trying to instil ethics in any future and eventual “thinking” computer. At the same time he notes that even the issue of what or which ethics we would try to instil is a difficult question as human ethics are so variable.

He says another scenario is that man and machine may become so integrated (“Borg-like”?) that we may look back and wonder or laugh at a time when man and machine (i.e., software) were completely distinct and separate.

What he does says with firmness is that it is virtually impossible to make any kind of accurate prediction in terms of time frame, outcomes, or anything on this subject.

Because of this, he is one of the experts who is not among the group expressing fear of the future of AI.