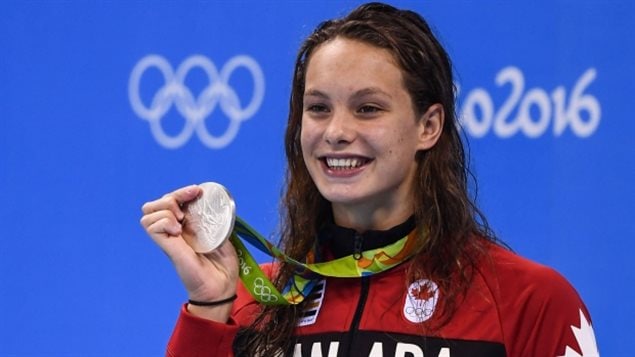 The 16-year-swimmer who stole the hearts of Canadians at last summer’s Rio Olympics is the winner of the Lou Marsh Trophy as Canada’s athlete of the year.

Named for a former sports editor of the Toronto Star, the winner is selected by a panel of journalists from across Canada.

Oleksiak suceeds Montreal Canadiens goalie Carey Price and is the first swimmer to win the award since Mark Tewksbury in 1992.

After serving as the flag-bearer at the Rio closing ceremonies, Oleksiak continues to rake in medals.

This month in Windsor, Ontario, she added four more at the short-course world championships.

“I think I really learned that I’m stronger than I think,” Oleksiak said after learning she won.

“I want to say that just because going into Rio, I definitely had my doubts about myself. I didn’t think I’d be able to even get into the finals.”

Her win comes 50 years after 15-year-old Elaine Tanner won the Lou Marsh for winning four golds and three silvers at the 1966 Commonwealth Games in Kingston, Jamaica.