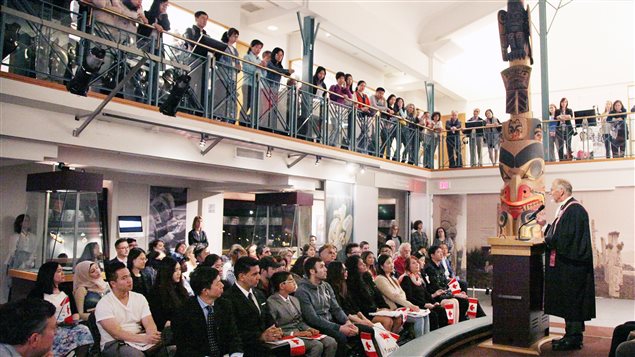 Prime Minister Mackenzie King was the first Canadian citizen. On January 3rd 1947, at Canada’s Supreme Court in Ottawa, he took the oath. Yesterday, 26 new Canadians did the same, also in the Supreme Court.

70 years, and a couple of revisions later, people are waiting in queues around the world, eager for the opportunity.

“To provide an underlying community of status for all of our people in this country that will help to bind them together as Canadians.”

It was Member of Parliament, Paul Martin Sr. who was then Secretary of State, that introduced the bill in 1946.

Heather Steel, of the Institute for Canadian Citizenship, says a sense of a distinct Canadian identity had been growing in the early 20th century, particularly in the wake of the two great wars.

Along with simplifying legislation that was at that time in bits and pieces in a variety of places, the new act would clarify citizenship. Steel quotes Paul Martin Sr.’s vision at the time; “to provide an underlying community of status for all of our people in this country that will help to bind them together as Canadians.”

Prior to 1947, all Canadians, were considered British subjects. While Mackenzie King’s act may have been just ceremonial, as all people born in Canada then, were automatically citizens, the conditions to become a citizen were established and viewed as a privilege.

A person had to be 21 years of age, a resident for five years and intending to live their life in Canada, with a comfort in either the English or French language. They also had to be familiar with the rights and responsibilities of a Canadian, and be of good character.

In 1977, another Liberal government revised several of these requirements, beginning with the establishment of citizenship as a right, not a privilege.

To exercise this right, one had to be 18 years of age, living in Canada for three years, and the former distinctions between British subjects and people coming from other places in the world, were abolished. Restrictions on dual citizenship were also lifted.

In 2014, the Conservative government passed a new citizenship act in what they saw as an effort to strengthen the process.

Another year was added to the residency requirement and there was increased investigation into the validity of these statements to sort out cases of fraud.

The language requirements were increased to provide demonstrations of proficiency for all applicants up to the age of 64. Both the guide and the citizenship test were revised to be more demanding with the result that more people failed.

Several of the revisions left many Canadians uncomfortable and some of the changes became major issues in the 2015 federal election campaign.

The increased conditions for revocation of citizenship, including anyone convicted of a crime of terrorism, as well as the conflict over women veiled or covered at citizenship ceremonies, became flash points of divisiveness.

The so-called immigrant votes that the Conservatives had wooed away from the Liberals were no longer guaranteed.

Following their victory, the current Liberal government, under Prime Minister Justin Trudeau, the son of the Prime Minister who oversaw the 1977 revision and made “multiculturalism’ official policy, has revised the act again. Some of the Conservative changes have been repealed and the bill is now making its way through the Senate.

The residency requirement is back to three years, the language requirements have been loosened and only applicable to those up to the age of 54, to accommodate grandparents and the elderly joining family already here. And anyone convicted of terrorism will serve their time in Canada.

Citizenship is back in the headlines again with the Conservative leadership race beginning to heat up. Today Lisa Raitt, a strong contender, challenged two of her rivals, Kellie Leitch and as yet undeclared candidate, businessman Kevin O’Leary.

Raitt blasted them for their bluster accusing them of following in Donald Trump’s footsteps. Leitch has been vocal about screening new immigrants for “anti-Canadian values”. She is also one of the former MP’s who announced a tip-line for Canadians to report their neighbours, suspected of “barbaric practices”. It was one of the lowest points in the 2015 campaign, and partly responsible for the Conservative government’s resounding defeat.

Leitch has not garnered much media attention in her leadership bid so far, so it may be surprising to some Canadians that her views are gaining support. Her campaign is now the best-financed. But Lisa Raitt claims a victory by either Leitch or O’Leary, will put the Conservatives in opposition at best, for a generation to come.

The leadership decision will be made on May 27th. In the meantime, all of the new citizens will be observing the discourse.

More than a million and half people have become Canadian citizens over these 70 years. For those who live here content with Permanent Resident status, perhaps the time to take a second look has arrived; one of the paramount rights citizenship confers, is the right to vote.

As 2017 gets underway, more Citizenship ceremonies are being planned. Canada was one of the pioneers in creating a ceremony. And they have moved beyond the governmental locations out into the community. From high schools to football fields, these rights of passage can take place wherever Canadians would like to host them.

Heather Steel, whose position at the ICC connects her with many of these ceremonies, says witnessing them is one of the best parts of her job.