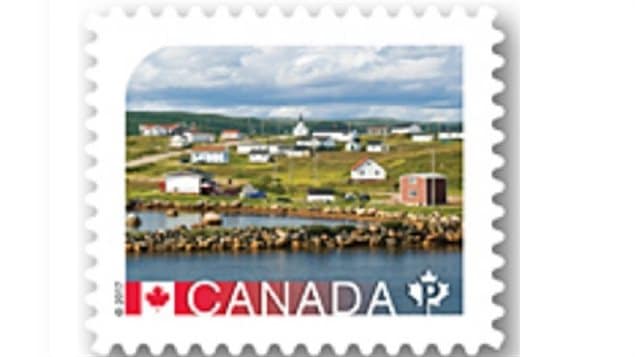 One of the newest in the series of Canada Post stamps featuring UNESCO World Heritage sites in Canada. Issued earlier for postage to the US, the stamp now for domestic postage shows Red Bay Newfoundland, site of the most complete examples in North America of a 16th century Basque whaling station.
Photo Credit: Canada Post

Canada post has released five new stamps. The stamps show fascinating world heritage sites as named by UNESCO, so declared for their importance to world history and heritage

Mistaken Point (N.L.), at the southeastern tip of Newfoundland, gives us some sense of what life looked like when organisms began to get larger than microbes and complex. Embedded along this gorgeous coastline are groups of the oldest known fossils of ancient soft-bodied life forms, dating back 560 to 580 million years. These strange multi-celled organisms ranged in size from as small as a fingernail to as long as a metre and had no legs or eyes. They are believed to be the planet’s first large life forms.

The Historic District of Old Québec (Que.), founded in 1608 by Samuel de Champlain, is still bustling with activity, yet has maintained the integrity of essential historical buildings and spaces over more than four centuries. Fortified with walls, gates and bastions, this is the only colonial city north of Mexico to have preserved its ramparts.

The L’Anse aux Meadows National Historic Site (N.L.), is located at the tip of Newfoundland’s Great Northern Peninsula it contains timber-framed turf dwellings built by a Norse expedition more than 1,000 years ago. The settlement is the earliest known European presence in North America.

Re-released for domestic postage were images of Dinosaur Provincial Park (Alta.), which was declared a World Heritage site for its exceptional fossil specimens of Cretaceous dinosaurs, as well as undisturbed badlands and riverside habitat. and of Red Bay Basque Whaling Station (N.L.), on the south coast of Labrador. This community has the remains of the most complete and extensive example of a 16th-century Basque whaling station in North America.

With the issue of these stamps, the odyssey of Canadian UNESCO sites is complete.