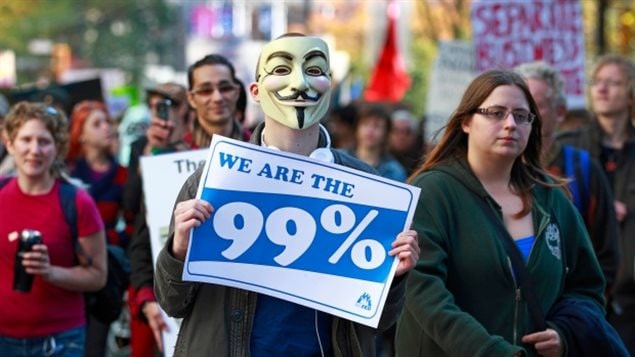 “The inequality crisis is bigger than we feared,” says Lauren Ravon, director of policy and campaigns at Oxfam Canada. “The gap between the super-rich and the rest of the population is widening.” She calls the figures absolutely baffling.

“We’ve had years and years of policies that have driven taxes down, that have undermined public services, that have created conditions where the super-wealthy can pay the least taxes possible and avoid paying taxes,” says Ravon.

“We’ve seen also that the super-wealthy are able to write the rules in their favour with strong lobbyists, with lots of money put into influencing decision-making. And when we see that happen, we see that the rules are written for the super-rich to continue to make increasing profits while the workers and wages are increasingly squeezed and there’s less money for the majority.”

Ravon says the trend is dangerous and unsustainable and leads to societies fracturing. “There’s more distrust among people. There’s higher levels of violence. There’s also less healthy societies. But we’re also seeing that this extreme concentration of wealth is undermining democracy.” She adds that has led to protest movements and the vote for Brexit in the U.K. and Donald Trump in the U.S.

Oxfam is calling on governments to ensure workers are paid a living wage and to close the gap between what men are paid and what women earn. It also wants governments to stop tax dodging and “the race to the bottom on corporate tax.” This, it says, would help generate funds for public services, education and job creation.

Ravon says corporations have a role to play. She gives the example of chocolate bar makers which used to pay cocoa producers 20 per cent of the revenue from the sale of chocolate bars in the 1980s and now only pay six per cent. “We’re seeing that companies are really squeezing workers and producers out of their fair share to increase shareholder profits.”  She says corporations should work for the greater good not just the bottom line.

While the Canadian government is taking some steps to address gender equality and tax avoidance, Ravon says it could do more. She calls on the government to tailor its upcoming budget to ensure that women’s work is paid, equal and valued. She would also like it oblige Canadian companies operating abroad to pay fair wages, respect environmental standards and not avoid taxes.

The release of this report called “An economy for the 99%” is timed to coincide with the World Economic Forum’s meeting of political and business leaders in Davos, Switzerland.