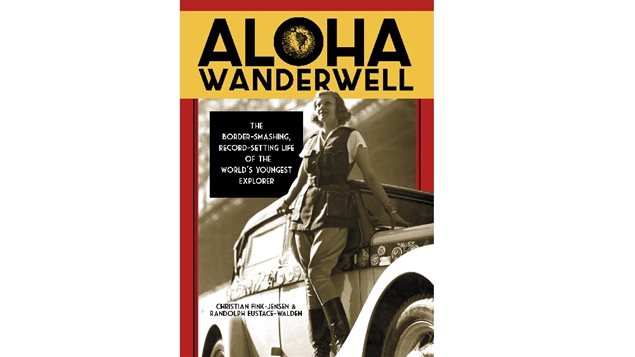 A new book about an amazing girl on the incredible adventures of Aloha Wanderwell *The Border-smashing, Record-Setting Life of the World’s Youngest Explorer*
Photo Credit: Goose Lane Editions

It’s an absolutely amazing story: and if it had been written as a novel, people would think it too outlandish and impossible. But in fact it is true.

A young girl, barely 16-years-old, joins up with an older man on a wild expedition in an alleged car “race” around the world in the early years of the 20th century when cars themselves were still a novelty in much of the world, and actual roads were few, and often non-existent.

It’s the story of a young woman, a girl really, who broke all societal barriers and broke record after record, including the first woman driver to cross India, and cross Siberia.

What’s also amazing is that so few now have even heard of this once world celebrity and of those that do, fewer still know that she was Canadian.

Christian Fink-Jensen is lead author of the book about the fantastic story of Aloha Wanderwell.

What is known for a fact is that Aloha was born and spent her early years in Canada, and that she later spent years in Europe.

It is here that the story gets more amazing at each step.

At a time when women, let alone girls, were expected to be demure, she smoked, learned to drive, drank, carried a gun, learned to fly, wore not just men’s clothing, but military styled uniforms all of this unheard of at the time, and she travelled to places where strangers had almost never been seen before, let alone cars.

It begins when she had just turned 16, and joins up with a self-described American army captain (who as it turns out is neither an American, nor Army Captain) . She joins what is an alleged race around the world, during which time they will film their adventures and show them to audiences while selling memorabilia to finance the adventure.

But the story involves love, jealousy, exotic international travel, hints of sexual impropriety, accusations of smuggling, espionage, and a mysterious murder and along the way travelled through regions on the verge of civil war.

Almost forgotten the authors have dug through the misinformation to find that the true story is even more amazing about this young Canadian girl who embarked on a record-breaking, world travel and exploration adventure.

NOTE: several Wanderwell films can be seen on YouTube