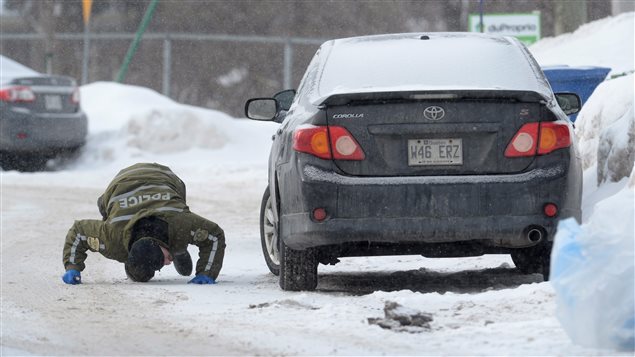 A police officer looks for evidence Monday under a car in the area of a Quebec City mosque where six people died after two masked men entered the building and began shooting Sunday night. Five worshippers are in critical condition. Authorities fear the number of dead could rise.
Photo Credit: CP Photo / Paul Chiasson

A spokeswoman at the Laval University Hospital says two of the five wounded will need surgery while the other three are stable and may be discharged soon,

Thirteen others have been released.

Police arrested two men Sunday night but now say only one of them is a suspect in the attack.

Mohammed Yangui, the mosque president, said the attackers walked in on the ground floor of the mosque where men pray and also went to the second floor.

“It seemed to me that they had a Québécois accent,” another witness who declined to be identified told Radio Canada. “They started to fire, and as they shot, they yelled, ‘Allahu akbar!’ The bullets hit people that were praying. People who were praying lost their lives. A bullet passed right over my head.

“There were even kids. There was even a three-year-old who was with his father,” the witness said.

The investigation is being handled by a combined team of investigators from the RCMP, the Quebec Provincial Police and the Montreal police service.