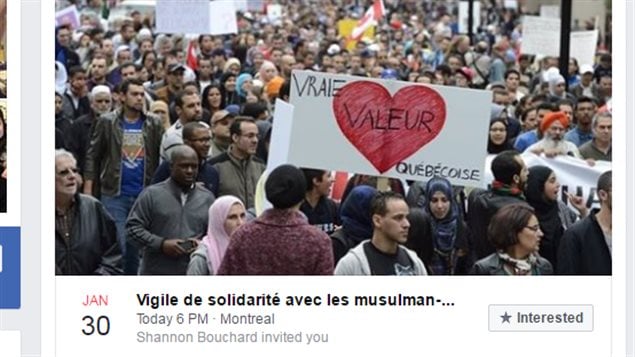 Activists are using Facebook and other social media to organize events in support of the Muslim community.
Photo Credit: Facebook

The deadly attack on a Quebec City mosque last night shocked the country and prompted people in several cities to mobilize. Very shortly after news of the attack spread, activists in Montreal announced a vigil would be held this evening in support of the victims and the wider Muslim community. Prime Minister Justin Trudeau is planning to attend a vigil in Quebec City at 7:30pm.

People were horrified to learn that two gunmen rushed into the mosque around prayer time last evening and opened fire, killing six and injuring 19 more.

A candlelight vigil is planned for this evening at government buildings in Edmonton, in the province of Alberta.

The Anglican Church in Ottawa has called a rally for noon today, as has a mosque in the city of London, Ontario. Other plans are being developed to express solidarity with the Muslim community.