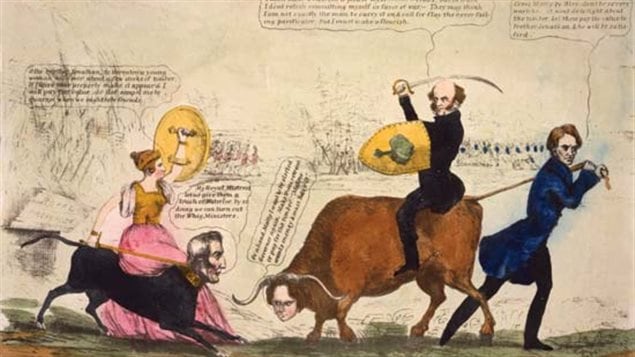 The name comes from the Aroostook River and County now mostly in the US state of Maine. The war pitted the US against Britain and the then colony of New Brunswick.

It’s also called “the Pork and Beans War”, mostly that’s because pork and beans was the mainstay of the lumberjacks, and of the military forces while they grumbled and glared at each other from their respective positions on and off from 1839-1842

With lumber becoming increasingly important, and more settlers moving into an ill-defined area between  the state of Maine, and the British colony (later Canadian province) of New Brunswick., the dispute which had been simmering for years finally began to boil over.

Although called a “war”, thankfully no serious armed conflict occurred. it was actually more of a heated diplomatic argument, although shots had been fired.

On February 8th, 1839 the Governor of Maine sent a sheriff and a posse of volunteer militia into the upper Aroostock area to arrest New Brunswick lumberjacks on the premise they were cutting trees in Maine.

Both sides laid claims to the forests and good farmland in the region and both sides had been cutting trees, while Maine had also been surveying and granting lots.

A number of “independent” compromises had been proposed over the years but one side or the other rejected them in turn.

But, on this day when New Brunswick lumbermen heard that some of their own had been arrested and equipment seized by the Americans, they immediately armed themselves and in turn seized the Maine land agent and assistants taking them back to Woodstock New Brunswick where the authorities held them as “political prisoners”.

It should be noted that in December the previous year, armed lumberjacks from both sides fired upon each other in a confrontation when they both wanted access to similar stands of trees..

While yelling threats back and forth a black bear (which should have been hibernating) attacked a couple of Canadian lumberjacks. The bear was shot and killed by the Canadians but the Americans thought the Canadians were shooting at them, and so began shooting back. With a couple of men injured by the bear, the Canadians withdrew. No-one was shot fortunately.

That only served to heighten tensions leading to the February 8th incidents. That in turn escalated with Maine authorizing 1,000 additional militia sent into the region, while the British began to muster their own forces.

By May the US federal government had authorized some $10 million dollars toward raising a force of 50,000 should foreign troops cross into the US.  Maine for its part authorized several thousand more troops should they be needed.

The Americans built two forts on their claimed land, while the British built a barracks across the Saint John River from the US Fort Kent, and began arming tributaries of the Aroostook River.

By 1840, although the situation remained tense, arbitration was agreed to as they decided international trade was more important than a costly war.

Eventually in 1842 the Webster-Ashburton treaty settled the border dispute in a sort of compromise between what both sides claimed.
The deal gave the Americans just over 18,000 sq.km of the area, and the “Canadians” just under 13,000 sq.km.

However as with the later Alaska boundary dispute “Canadians” felt betrayed by Britain which they believed had conceded to the Americans giving them the best of the deal in order to keep good realtions, and also that the border now allowed for substantial American incursion into a narrow pathway between Lower Canada (Quebec) and the Maritimes.

In 1952, a book authored by scholars Hugh Keenleyside of Canada, and American George S. Brown indicated, “Unjust as such accusations are, it is nevertheless a fact that many Canadians still consider the Ashburton Treaty of 1842 to be the first and most important instance of the loss of Canadian rights due to the complacency of Great Britain and the crooked diplomacy of the United States”.