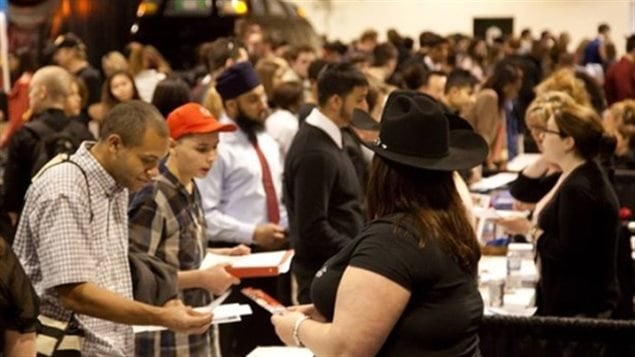 More and more often men of all ages, pushed out of tradtional *men’s work* show up at job fairs looking for employment, but are often frustrated due to lack of education or skills that are no longer in demand
Photo Credit: City of Calgary Youth Employment Centre

The world’s changing job market and males left behind

Traditional male areas of employment such as manufacturing, are disappearing, and men , especially older men are being left behind as the job market, and jobs change.

Gerald Swartz is a private consultant, and and instructor in business and economics at Ryerson University in Toronto.

Typical industrial jobs of the kind that have traditionally attracted males, are waning, whether in the auto sector, manufacturing, mining, forest industry and so on.

To some extent, technology is eliminating the jobs from robot welders, to forest machines where one operator can cut trim and stack trees to replace dozens of workers.

In other cases, jobs formerly in Canada are either being pulled back into the US, or sent to manufacturing overseas.

Another serious issue is that even these blue collar jobs are requiring higher levels of education as laws, equipment, and techniques become more complex, but boys are still dropping out of school at far higher rates than girls.

In the 1960’s far more boys than girls graduated from university. That has now changed completely.

This is not just in Canada, but in all OECD countries where boys typically are underachieving in math, science, and especially reading.

Areas of job growth are in the education, health and service industries, which have typically been female dominated, and often perceived by boys and men as “women’s jobs”.

Swartz also points out two other issues connected with wage inequality where women are generally paid less than men throughout society.

The first is, that it is hard for a man to lose a well-paying manufacturing job, and then to accept an often much lower paying position in a “women’s field”.

The second hurdle is that employers may choose to hire a woman over a man even for a white collar job because of this pay inequality.

Swartz says the past idea of a steady job for life is gone, and people should be prepared to change jobs even careers a few times. For that he says, you need education and skills. For that to happen, society has to motivate boys of the advantages of education, the need to stay in school, and an understanding that past employment models are gone.