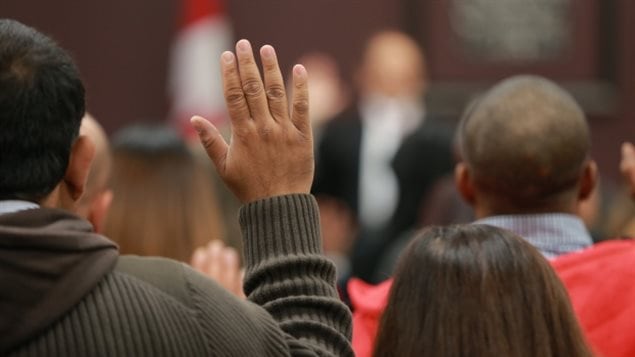 Fewer hands are being raised for the citizenship oath since application fees were raised.
Photo Credit: CBC / Jonathan Castell

In what one advocate calls an “alarming” trend, Canadian citizenship applications dropped dramatically– nearly 50 per cent–in the first nine months of last year.

The decline appears to be a result of a tripling of application and processing fees.

Stephen Harper’s Conservative government increased citizenship applications fees from $100 to $530 in 2014-2015. That’s in addition to a $100 “right of citizenship” fee.

The figures are included in a briefing prepared by Andrew Griffith for the Senate social affairs, science and technology committee, which begins hearings this week on Bill C-6, a law to amend the Citizenship Act.

Griffith is a former Department of Immigration and Citizenship director who is currently a fellow at the Canadian Global Affairs Institute.

Calling the the drop in applications, “alarming” Griffith links it directly to the steep increase in fees.

And, he says, the costs for prospective Canadians don’t end there and include such things as language training.

Griffith says the solution is to set the processing fee to $300, abolish the right-of-citizenship fee, and consider a waiver for refugees and low-income immigrants.

Dory Jade, CEO of the Canadian Association of Professional Immigration Consultants, says many of his clients are delaying citizenship because they can’t afford the fees.

It is unclear if Justin Trudeau’s Liberal government is planning to lower the fees.

The Senate committee examining Bill C-6 is scheduled to hold hearings Wednesday and Thursday. Immigration and refugee lawyers as well as academics scheduled to testify.

Bill C-6 is an attempt to streamline and strengthen the integrity of the citizenship process by reducing the time permanent residents have to live in Canada to become eligible for citizenship, counting time for work or study in residency requirements, and reducing the language proficiency requirements for younger and older immigrants.