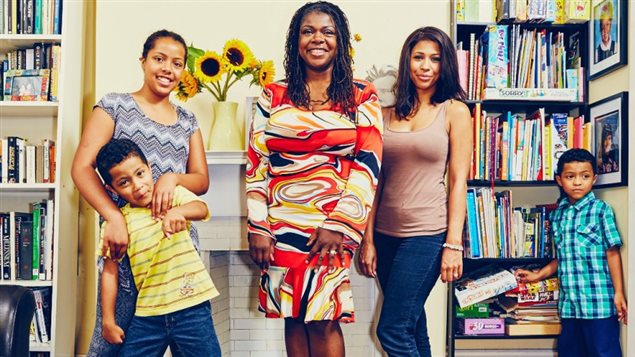 Samantha Kemp-Jackson has talked to her four children about racist and anti-ethnic talk and encouraged them to challenge it.

Time to talk to the kids, says black writer

It’s Black History Month in Canada and, with all the rhetoric about ethnicity and race going on in the U.S., it’s a good time to talk to the kids, says Toronto parenting writer and blogger Samantha Kemp-Jackson.

‘It’s happening here in Canada’ too

“I would venture to say that there has been an emboldening of certain types of ideologies, whether it’s alt-right or extreme white nationalism against people of colour, against people of different religions and ethnic backgrounds. And I think it’s been facilitated by what’s been happening in the U.S.

“So, yes, it is happening here in Canada and I don’t think we’re immune to it. And I think we need to stop thinking that we as Canadians don’t have to have to deal with this because we do.

“We are a diverse society but we also are dealing with a lot of rhetoric that’s coming out of the States that’s allowing people to feel that it’s okay to things that they might not have even said a year or two ago.”

Kemp-Jackson says there is real value in Black History Month. With so much negative talk around, she welcomes the positive messages about the accomplishments of black Canadians that her children receive at school and the general public gets as well.

In the context of so much rhetoric from the U.S. “percolating” into Canada, she says it’s time to “take lemons and turn them into lemonade,” time to talk to young people about it. And she provides practical advice.

‘Stand up to bullies’

“I’m hoping that I’ve taught my children to have confidence in their abilities, have confidence in who they are as people…of colour. Also, to stand up to it so when they see or hear somebody saying something to them that is racially-based or untoward or negative, to question it… to say ‘why did you say that to me, what did you mean by that, why have you singled me out,’ to stand up to bullies and people who might be using racially-divisive terminology against them.

‘This is not okay’

“Because if we don’t stand up to people who are doing this then they will feel that what they are doing is okay. By standing up to them and teaching our kids to stand up to this type of thing we are putting it out there that this is not okay, it’s never been okay and it no longer will be okay and we’re going to challenge you on this.”