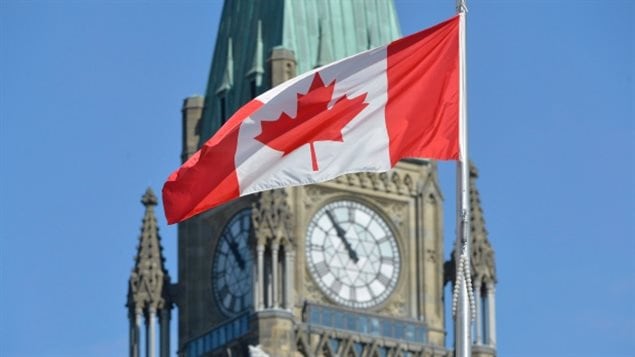 Canada history: Feb 15 1965- Canada finally gets its own, wonderful, flag

Canada is still a relatively young country, but our national flag is even younger.  At 52, the Canadian Maple Leaf is now one of the most recognized flags in the world.

Canada’s red and white Maple Leaf Flag was raised officially for the first time on this date February 15, 1965.

Throughout most of our history, the British Royal Union Flag was the official national flag, in fact until this date in 1965.  Nevertheless, there had been a series of semi-official flags based on the British Red Ensign.

When the Dominion of Canada was created in 1867, its first semi-official (de-facto, not de jure) flag was a Red Ensign-based design with the symbols of the four original provinces, Ontario, Quebec, Nova Scotia and New Brunswick 1871, in the fly.

From approximately 1873 – 1921, as new provinces entered Confederation, their symbol (sometimes taken from their seal), that mark was incorporated into the shield. By 1921, it was made up of the coats of arms of the nine provinces then in Confederation.

However, by then this design in the fly was crowded and a bit confusing.  Because it was unofficial, various flag makers would add their own embellishments, some adding a crown on top of the shield, some placing it inside a white circle, some adding a garland of leaves around it and so on.

Because of the crowded design, that same year (1921) the federal government asked King George V for a new Coat of Arms for Canada, subsequently designed by the College of Arms with the symbols representing founding cultures of England, Scotland, Ireland, and France.

The crowded composite shield design was thus changed by an Order in Council and replaced with the new shield from the Royal Arms of Canada, more commonly known as the Canadian Coat of Arms in 1922.

In 1924, this new version was approved for use on Canadian government buildings abroad.  In 1945 an Order in Council authorized its use on federal buildings within Canada until a new national flag was adopted.

In 1957, a slightly more stylized version was produced, changing the leaves from green to red, and notably removing the women’s breasts from the Irish harp symbol.

However, none of these were ever “official” flags of Canada.

While all this was going on, the idea of a distinct flag for Canada had been going on since the earliest days of the country.

In the 1920’s the Privy Council had discussed the idea but after no concensus was apparent, the idea was shelved.

It come up again however in 1946, after Canada emerged from the Second World War as a major manufacturing power with a stellar record of courage, determination and identity following the war.

Some 2,600 ideas for a flag were submitted, but once again the project faded

With the Suez crisis in 1956, Canada’s then Secretary of State for External Affairs, Lester Pearson, created the idea of an international and neutral force to separate the opposing sides.

For his idea of “peacekeepers” and the de-escalation that resulted, he was awarded the Nobel Peace Prize in 1957.

However, Canada’s own participation in that “United Nation Ermergency Force”  was rejected  by the Egyptians as the Canadians were too “British” in uniform and symbols.  This irked  Pearson who bore this slight with him even as he was campaigning to become Prime Minister in a 1963 election

Canada’s centennial was looming just four years away, and an election promise was to give Canada  a distinguishing and unique (ie not British influenced) flag.

The Maple Leaf had been suggested as a national symbol in the 1830’s well before Canada was even a country.

In the early 60’s a national debate began, and literally thousands of suggested designs were submitted.

As the Centennial approached,  so to did the debate about a Canadian flag.  It became extremely bitter debate both in the House of Commons where the Conservative leader, John Diefenbaker  heatedly defended the use of the Canadian Red Ensign, backed by the tens of thousands of members of former military personnel of the Royal Canadian Legion. It was a debate that also divided friends, and even family members.

Nevertheless Canadians submitted literally thousands of designs, many of them rather bizarre.

Pearson set up an all-party flag committee which waded through the thousands of submitted signs and slowly whittled them down over the course of six weeks,

In 1964, George Stanley a professor at the Royal Military College (RMC) in Kingston Ontario, had written to a member of the committee stating that a  new flag for Canada should be instantly recognizable, use traditional colours, and be a simple design, also that it should not be divisive, ie avoid use of the Union flag of Britain, or the Fleur de Lys of France.

He had suggested that the RMC flag was a good basis, but instead of the mailed fist for the military college on a white field between two red bars, a single Maple Leaf be used in its place. Red and white were the official colours of Canada, so that worked.

The design was simple, easily recognizable, and would not offend either of the country’s two founding peoples, English and French.

After several secret ballots eliminating the remaining few options, the committee accepted this idea and it was presented to Parliament.

Canada’s new and unique flag was unfurled officially on February 15th, 1965, in a ceremony in front of Parliament in Ottawa and a crowd of thousands who watched silently as the Red Ensign was lowered for the last time, and then gradually erupted in cheers as the new flag rose and unfurled in the breeze.

In 1996, National Flag day was officially proclaimed by the then Prime Minister Jean Chretien.

At the stroke of noon on February 15, 1965, Canada’s red and white maple leaf flag was raised for the very first time.

The flag belongs to all Canadians; it is an emblem we all share.

Although simple in design, Canada’s flag well reflects the common values we hold so dear: freedom, peace, respect, justice and tolerance.  Canada’s flag is a symbol that unites Canadians and expresses throughout the world and always our pride in being Canadian.

The maple leaf flag pays homage to our geography, reflects the grandeur of our history and represents our national identity.

Our flag thus honours Canadians of all origins who through their courage and determination, have helped to build and are continuing to build our great country: a dynamic country that is open to the future.

Therefore, I, Jean Chrétien, Prime Minister of Canada, declare that February 15 will be celebrated henceforth as National Flag of Canada Day.

Let us be proud of our flag!  Let us recognize how privileged we are to live in Canada, this magnificent country that encompasses our history, our hopes, our future.