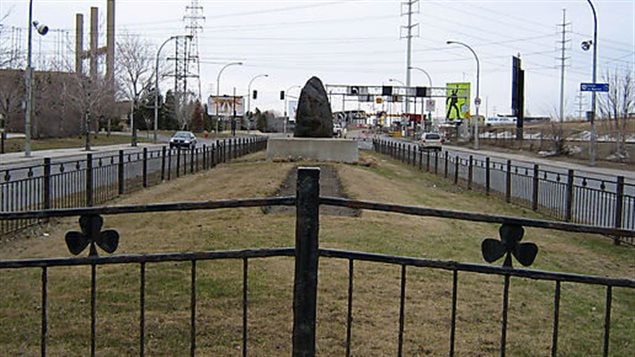 Black Rock, the monument that was laid in memory of more than 6,000 Irish immigrants who died and were buried here in 1847, escaping the Great Hunger in Ireland.

The Black Rock monument in Montreal was laid in 1860. And over the years it has remained in the hearts and minds of the decsendants of Irish immigrants to Montreal and elsewhere in Canada

.But the site is in a sad state. The annual ‘Walk to the Rock’, which has been a tradition for over a 120 years, can only take place with a police escort.

The rock sits on a narrow boulevard between cars exiting and entering the Victoria Bridge, many at break-neck speeds.

Now a group of Irish-Montrealers have been organizing to create a memorial park, along the river. just east of the site. And they’re hoping their ongoing efforts will soon be successful.

“the very first monument, anywhere in the world, to the famine”

Fergus Keyes is one of the directors of the Montreal Irish Monument Park Foundation. The group is working to convince the federal government and the local city government to coordinate their efforts and make a large abandoned parking lot available, to be transformed into a memorial park.

“As they were building this Victoria Bridge, the workers, most of whom happened to be Irish of course, start discovering bones of these immigrants who had died just twelve years before. So in order to commemorate it, they pulled a big rock out of the St. Lawrence River, and made an engraving on it to say that it was to the memory of the 6,000 immigrants that died and were buried there at that point, and it actually became the very first monument, anywhere in the world, to the famine,” says Keyes.

“To preserve from desecration the remains of the 6,000 immigrants who died of ship fever A.D. 1847-48” is part of the inscription. It is a stark reminder that this is the very site of the fever sheds built to house the dying at the time.

The park will commemorate not only the Irish famine victims, but the memory of the people in Montreal who contracted typhus as well and died trying to help. Many of the Grey Nuns are among this group, as was the mayor of Montreal at the time, John Mills.

Keyes says many of the children who survived the journey but were orphaned in Montreal, were then adopted into French Canadian families but allowed to keep their names and the memory of their heritage. This is why you can meet a “Patrick O’Reilly” in Quebec, who doesn’t speak a word of English, Keyes explains.

“people jumped in and did what they could to help”

“It’s very, very similar to, in some ways, what’s happening to present day immigrants if you take Syrians for example, having to leave their home. Maybe the cause is different but the result is the same. But there’s also that positive end in 1847 and today even in Canada, people jumped in and did what they could to help”. Keyes says.

It is a month now until St. Patrick’s Day, an occasion that is widely celebrated. The annual parade in Montreal, the longest-running in St. Patrick’s Day parade in the Canada, celebrating its 194th edition, will honour Montreal’s Mayor, Denis Coderre as the Grand Marshal.

Denis Coderre has Irish roots on his maternal grandmother’s side going back to John McCabe who emigrated from Co, Cavan in 1842.

There are other reasons the green space would be a good idea. The nearby community known as Griffintown, is undergoing rapid gentrification and a green space, particularly one along the river would be a welcome addition to the neighbourhood and help in reclaiming the waterfront.

Keyes has faith: “I think it’ll happen, I’m just not sure when.”