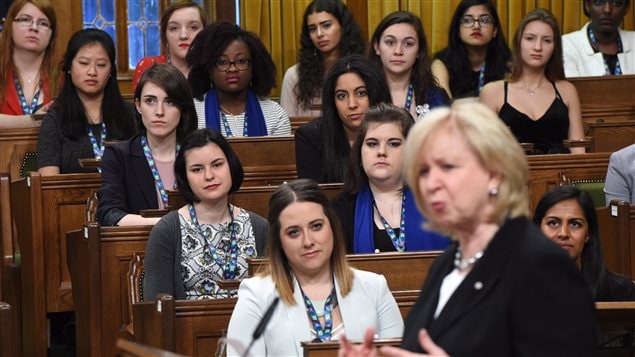 Kim Campbell, 19th Prime Minister of Canada, addresses the young women during the Daughters of the Vote event, in the House of Commons on Parliament Hill in Ottawa today.
Photo Credit: CP / Sean Kilpatrick

Daughters of the Vote, is the name of the event organized by Equal Voice. It was a powerful demonstration in Ottawa today, bringing one young woman, from all 338 federal ridings across Canada, to take a seat in the House of Commons, including 70 Indigenous delegates.

“It is a glorious sight to see you all here”

The intent is to give them an experience of the political environment in Ottawa, with the goal of increasing women’s representation in future Canadian parliaments. Women currently make up 26 per cent of parliament, occupying 88 of the 338 seats.

Khadija Waseem is a 20 year-old student from the Don Valley North Riding in Toronto. Born in Lahore, Pakistan, she came to Canada with her parents when she was 2. She was one of the young women who rose to question the Prime Minister while in Parliament today.

Waseem spoke about Islamaphobia, and commented on the plight of her First Nations’ colleagues and their struggle for equal rights and opportunity.

She says she was thrilled, moved, and mostly honoured to be part of the event.

Encouraged by a friend to get involved she says she is returning to her community with a renewed sense of what women can accomplish.

While she has no immediate plans to run for a seat in parliament she is aware of the many issues that need addressing, such as the ongoing stigma against mental ill health in many immigrant communities.

Some women got the vote

In 1917, some women in Canada got the right to vote, following the hard work of suffragists such as Nellie McClung. In Manitoba McClung, a founding member of the Political Equality League, argued with a sharp wit:

“Our worthy opponents will emphasize the fact that women are the weaker vessel. Well I should think that a woman who cooks for men, washes and bakes and scrubs and sews for her family could stand the extra strain of marking a ballot every four years.”

White women in the province of Manitoba were enfranchised with the right to vote in provincial elections in 1916. In 1917 white women followed nationally.

It took until 1940, however, for the women of Quebec to be granted the vote. Indigenous women living on reserves had to wait until 1960, reflecting the racist attitudes to indigenous peoples that is only now beginning to be addressed in Canada.

Meanwhile, other minority groups, such as Asian men and women, fought over the years for their right to vote, and were denied several times.

Canada’s Charter of Rights and Freedoms, passed in 1982, fully enshrined the right to vote in law.

Prime Minister Justin Trudeau took the pioneering move of balancing his cabinet with 50 per cent female ministers, when he came to power in the fall of 2015.

Today, on the occasion of International Women’s Day, the Daughters of the Vote event provided the opportunity to introduce young women to the seats of power in Canada, the experience of being in the place where the decisions are made that effect us all, and some insight into how it works.

The Right Honourable Kim Campbell, Canada’s first and only female Prime Minister, addressed the young women. Campbell became Prime Minister in 1993, not by election, but by the resignation of then Conservative Prime Minister Brian Mulroney.

It was a short-lived term from June to November when the government fell and the next election campaign began.

Campbell appeared delighted to be back in the House of Commons telling the young women that “it is a glorious sight to see you all here”.

She continued speaking frankly, with humour and wisdom, explaining some of the parliamentary traditions, such as the fact that MP’s don’t read in parliament, although they may use ‘copious notes’ as was often the case in the British parliamentary system.

Campbell shared some of her experiences, from not being able to wear pants at the time, to living with the challenges of distance in Canada. Not being able to get back to her home and her constituents in Vancouver very often then, was eventually changed.

The event continued with the leaders of each of the political parties addressing the house, and the Prime Minister eventually welcoming the group.

Carly Pettinger was another of the 338 to take a seat today. “Equal Voice did a really good job of picking us from different lived experiences,” she told CBC News. “I’ve learned so much from all of the different delegates.”  From Kitchener, Ontario, Pettinger said, “The women that I’m meeting are changing my life in really meaningful ways,”