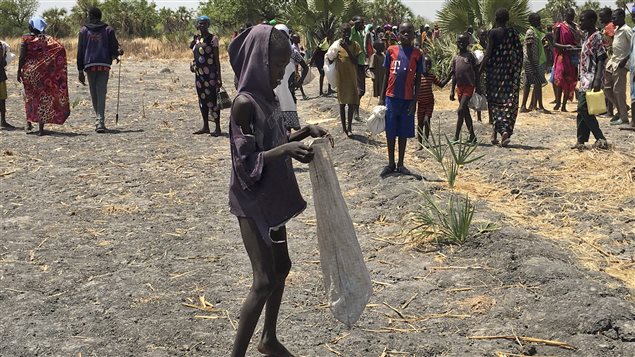 Lulu Yurdio gets food aid for himself and family members who are hiding in the bush in Padeah, South Sudan. They have fled famine and fighting in Leer county.
Photo Credit: Sam Mednick/AP Photo

The International Committee of the Red Cross (ICRC) is appealing for funding so it can help five million out of the 20 million people facing famine or the risk of it in Somalia, Yemen, South Sudan and Nigeria. ICRC is blaming the humanitarian crises in these countries on warring parties and it has appealed to them to obey the laws of war.

‘The root cause is…intractable conflict’

“No amount of aid money will overcome political obstructionism and a failure to abide by the norms of warfare. Ultimately, in these countries, famine is a by-product. The root cause is the presence of long term, intractable conflict. It’s the conflict that renders agricultural land unusable, that forces people to flee their homes, and that destroys hospitals and other vital services,” said ICRC director of operations, Dominik Stillhart at a news conference in Geneva.

Severe drought is adding to the suffering.

ICRC is appealing for $400 million for food, water, shelter and health care. In addition it says its partners in the four countries will need at least another $100 million for their own relief efforts.