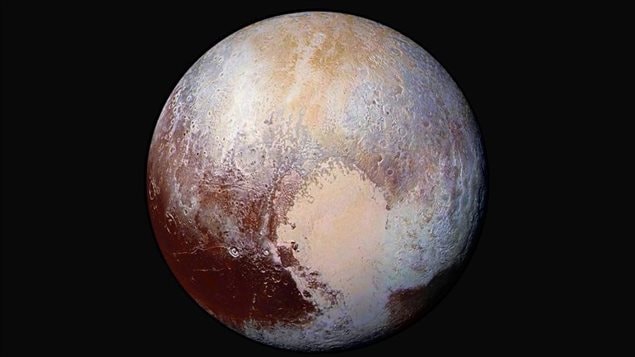 In 2006, Pluto was declared not a real planet but a dwarf planet.
Photo Credit: NASA/JHUAPL/SwRI via AP

Some scientists seek to revive Pluto’s status as a planet

In 2006, Pluto lost its status as a planet and now some NASA scientists want to redefine the term “planet” so that Pluto would again be considered to be one. The debate over this is fraught.

“This has been a can of worms really that’s been opened up and (there is) bad blood there between some scientists because when the voting took place back in 2006, many of the leading scientists weren’t even involved in the vote,” says Andrew Fazekas, the astronomy columnist with National Geographic.

The decision was made at a meeting of the International Astronomical Union, but many planetary scientists were not attendance.

Now, leading the charge to redefine what is a planet are scientists who study Pluto, who may be concerned that if Pluto is not considered a planet, it garners less interest and less funding for, says Fazekas.

Pluto not as large as originally thought

Pluto was originally discovered 1930. It appeared to be very large and was declared a planet. “Technology was vastly different at that point and Pluto was thought to be as big as Jupiter…and alone in the outer fringes of the solar system,” he says. “Now we know that Pluto is definitely not alone. There is many of its kind around there—probably tens of thousands.”

Pluto is not a ‘cosmic bully’

The current definition of a planet is a sphere that has gravitational dominance or is a sort of bully that absorbs or ejects other objects that get too close. If that definition were to change it might include Pluto but also over a hundred new bodies that could fit the description including Earth’s own moon. That could cause confusion.

The matter will be debated at the upcoming Lunar and Planetary Science Conference in Houston, but Fazekas does not think there will be much headway made in changing the current definition of a planet or changing the status of Pluto as a dwarf planet.

However, he adds, it is interesting to see science at work.