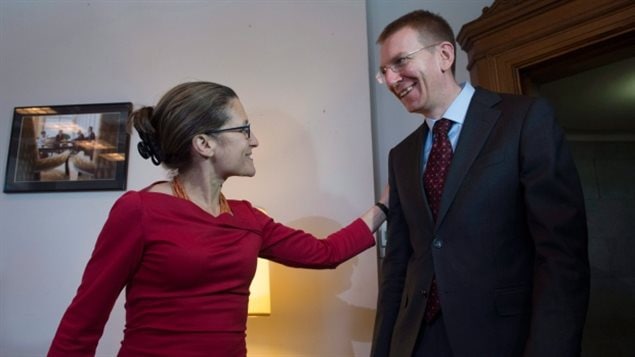 Minister of Foreign Affairs Chrystia Freeland welcomes Edgars Rinkevics to her office on Parliament Hill on Thursday. Rinkevics says Canada and Latvia need to be prepared to counter Russian-backed cyberattacks as a part of Canada's NATO mission to deter Russian aggression in the country.
Photo Credit: CP Photo / Adrian Wald

Latvia’s foreign minister was in Ottawa Thursday with a warning for Canada: brace for Russia-backed smear campaigns, a spate of so-called fake news stories and cyberattacks when 450 Canadian troops arrive in his country in June.

Canada is set to lead one of four multinational battalion-sized formations currently being set up in eastern Europe under NATO auspices as a deterrent to Russian expansionism in the region and Edgars Rinkevics says Canadians should be prepared for the fallout.

Defence experts say the likelihood of a full-throttle Russian invasion of Baltic states is remote, but NATO troops will likely face attempts to destabilize the region through propaganda and cyberattacks.

Rinkevics says Latvia and Canada must be prepared to “immediately counter” the Russian moves.

When German troops recently arrived in Lithuania, Rinkevics said, they faced a series of false reports of sexual misconduct aimed at driving a wedge between them and the local population.

“Of course, it was rubbish and nonsense, but if both governments and both militaries did not take immediate action…I think we would have been in quite a disaster,” Rinkevics told CBC News following a series of meetings with Canadian officials, including Foreign Minister
Chrystia Freeland and Gen. Jonathan Vance, Canada’s chief of defence.

Troops from four countries–Albania, Italy, Poland and Slovenia–are set to join the Canadian-led contingent this fall.

NATO is currently hammering out how it will respond to any Russian cyberattack, which the alliance now considers equivalent to a conventional attack using troops and military hardware.

So far, NATO has not said what would elicit a response either in cyberspace or in a conventional military manner.

Ottawa has repeatedly said troops deployed in Latvia will operate in a defensive manner.