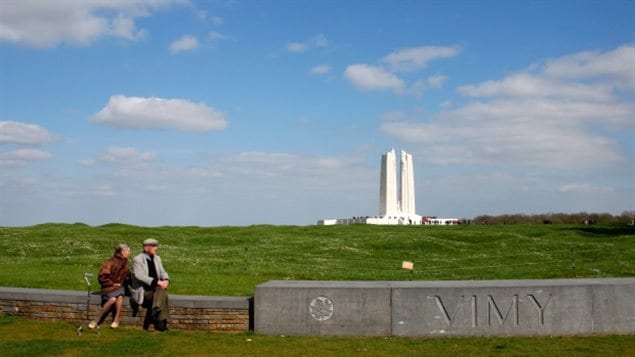 The towering memorial atop Vimy Ridge was designed to commemorate not only that major victory but to all the Canadian soldiers of the war who sacrificed their lives. It dominates the surrounding area. Thousands will gather there this weekend, including many state leaders, to commemorate the Canadian victory there April 9-12, 1917.
Photo Credit: Michel Spingler/Associated Press)

100 years since Canada became a world nation at Vimy Ridge

About 25,000 people are in northern France this weekend to commemorate the centennial of a major event in Canadian and world history.

They are gathering at a high ground about half way between the French cities of Arras and Lens. That high ground is known as Vimy Ridge

In the wee hours of April 9, 1917, tens of thousands of young Canadian soldiers lay damp and shivering in the muddy trenches in northern France. They and thousands of British and other Commonwealth troops were about to take part is yet another thunderous and bloody battle in the First World War.

They were to attack a seven kilometre long escarpment known as Vimy Ridge.  The Germans has taken the high ground in 1914, and repelled French and British attempts to take it back, with the horrific loss of well over 150,000 Allied lives. Since then the Germans had been busy reinforcing their position even more.

And then, in late 1916, the near impossible task was given to the Canadians.  The four divisions of the Canadian army to that time had been spread out among British forces, but for the first time, they would fight together as an army, and in a battle planned by a Canadian General.

Among them was a 21 –year old medical student from Hamilton in southern Ontario, Lt. Claude Williams.  The subaltern wrote often to parents back home.

“The attack was at daybreak, we had to lie in the open trenches all the night: the morning turned out grey, cold and drizzling, everybody shivering and chilled to the bone.”

“At the arranged time, to the absolute second, suddenly, as dawn was breaking, every gun on the whole front opened up. The roar of the heavy guns was deafening,”

H-hour was 05:30, and the men arose and began the “Vimy glide” advancing 100 yds every three minutes behind the similarly advancing artillery shells falling several hundred yards ahead.  This “creeping barrage” was a new Canadian tactic designed to keep the enemy in their trenches away from their guns until it was too late and the Canadians were upon them.

“At one place, we heard a Canadian who was lying deep in a shell hole calling out, ‘Water, water!’” Williams wrote. “The top of his head had been blown off, exposing his brain. We could do nothing. Orders were that we were not to stop to attend the wounded. They must wait for the stretcher bearer.”

The Canadians continued to advance in spite of the incredible resistance.

By April 12, the Canadians had taken all of the ridge having made greater advances, and captured more arms, and more prisoners (4,000) than any other Allied offensive since the start of the war.

Many of the Canadian soldiers were in fact recent or relatively recent immigrants to Canada, mostly from Britain, but as a result of this victory they now began to consider themselves, not as ex-pats, but indeed as Canadians.

Although not a huge strategic victory– it was not a turning point in the war, nor had a significant effect on the final outcome–  it was absolutely considered a major morale booster for the Entente (allied) forces which were in desperate need of a victory and good news of any kind.

The victory caused immense pride back home. Canadians had succeeded where others had failed.

Canadians had begun the war as colonials, as subordinates, but through their demonstrated valour on several occasions earlier, and now with this huge success, were now politically and militarily considered equal Allies. Indeed, Canada would go on to take its place as a distinct Allied nation at the Versailles peace talks.

The Canadian army would go on to build on their reputation just months later with another stunning victory at Hill 70 a little further north near Lens, and still later to become the Allied shock troops winning every battle in the final 100 days of the war.