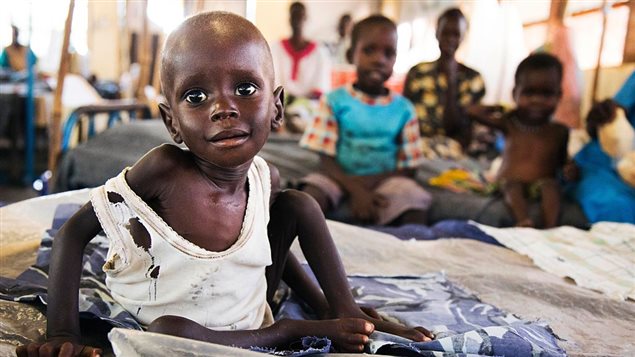 Canada’s official development assistance, which stood at $3.9 billion US in 2016, was down by 4.4 per cent compared to the previous year and accounted for about 0.26 per cent of the country’s gross national income (GNI), according to official data collected by the OECD.

That’s well below the 0.32 average for the 29 Development Assistance Committee (DAC) countries and the 0.7 per cent target that was established by a 1970 resolution of the United Nations General Assembly, said Fraser Reilly-King, senior analyst at the Canadian Council for International Co-operation (CCIC).

(click to listen to the full interview with Fraser Reilly-King)

In fact only six OECD countries – Denmark, Germany, Luxemburg, Norway, Sweden and UK – met or exceeded the 0.7 target last year. Canada is one of seven DAC countries that has seen a decline in its development assistance, he said.

Canada’s official development assistance funds a number of projects ranging from emergency aid to victims of humanitarian disasters around the world, to supporting countries like Jordan and Lebanon that are dealing with huge refugee influxes, to key programs on nutrition, health, education, water sanitation and hygiene, Reilly-King said.

“The new numbers have both a good news story and a bad news story,” said Reilly-King.

On the one hand, official development assistance from the 29 DAC member countries – the most prosperous OECD member countries – increased from $131 billion US in 2015 to nearly $142 billion in 2016, an increase of 8.9 per cent after adjusting for exchange rates and inflation.

Measured in real terms international development assistance has doubled since 2000, according to OECD numbers.

On the other hand, despite their rhetoric of increasing foreign aid, the Liberals are on track to spend less on international development aid than the previous Conservative government, said Reilly-King.

International Development Minister Marie-Claude Bibeau said part of the decrease in Canada’s official development assistance reported by the OECD could be explained by changes in exchange rates and differences between the fiscal year and calendar years.

(click to listen to the interview with Marie-Claude Bibeau)

“But I think what is important to remember is that Canada is contributing more than $5 billion dollars in humanitarian assistance and international development,” Bibeau said. “This is very significant.”

The international community would need to raise between $5 and $7 trillion to meet the sustainable development goals by 2030, she said.

“We really need to think about innovative financing and not only thinking about traditional ODA,” Bibeau said. “We are working on it and you’ll in the coming year that we will be putting a lot of emphasis on new ways to finance and new partners.”

“We will launch our new international assistance policy very shortly and you will see that women and girls are at the heart of this new policy,” she said, “that women empowerment is very important because we know that if we invest in women, each and every dollar goes much further and it has a bigger impact on development and also on peace.”

However, the Liberal government will not have the promised funding framework to accompany their new development policy, said Reilly-King said.

Bibeau confirmed that so far there is no funding tied to the Liberals’ new international development policy.

“We have seen in the recent budget that there was no additional money for international development except if we talk about the $300 million for the Development Fund Initiative and also a contribution to the Asian Development Bank,” Bibeau said. “These are also new types of funding that will allow our Canadian money to leverage and to bring more impact in the field.”

She was still optimistic that she will get more money in the coming year, Bibeau said.

Last November, the House of Commons Standing Committee on Foreign Affairs and International Development put out a report recommending the government increase its official development assistance to 0.35 per cent of GNI by 2020.

The government should aspire to a plan that would see Canada spending 0.70 per cent of its gross national income on official development assistance by 2030, the report said.

“Unless and potentially even if this government commits substantial resources to official development assistance, unfortunately this government is in a position of probably having by the end of its mandate the worst track record in the Canadian history,” Reilly-King said.

Aid groups hope the fact that Canada will be hosting the G7 meeting in 2018 will loosen the government’s purse strings on development assistance, Reilly-King said.

“We recognize where Canada sits in terms of its commitment to the ODA is just one metric that will signal to the world that Canada is back,” Reilly-King said. “But we feel that it’s a really important metric and we feel that unfortunately as it currently stands Canada is back but it’s way back.”