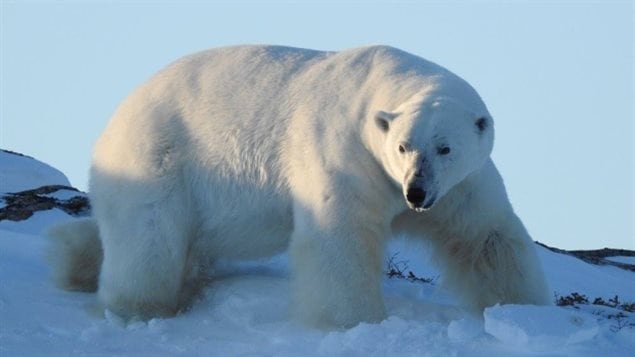 Polar bears use their sense of smell to find seal dens hidden under snow.
Photo Credit: Submitted to CBC by Edwin Clark

A new study shows polar bears travel crosswind when winds are light to hunt seals, but climate change means winds will grow stronger in the Arctic and that could make hunting more difficult for them.

Researchers at the University of Alberta followed polar bears in the Hudson Bay area for 11 years. They used GPS and satellite imagery to compare their movements to wind patterns.

Travelling crosswind gives the bears access to smells from a broader area and makes it easier for them to detect seal dens hidden under the snow.

It has long been believed that predators use their sense of smell and travel crosswind to find their prey. But this is the first time the behaviour has been scientifically confirmed in a mammal.

If hunting becomes more difficult that may make it more difficult for polar bears to survive. Diminishing sea ice is also a problem. The bears have to swim father to find ice floes from which they hunt and there are fewer of them. The population at Hudson Bay has already dropped from 1,200 to 800.

The study was published in Scientific Reports.