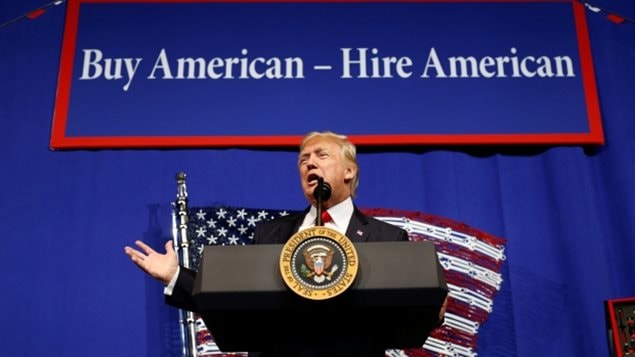 U.S. President Donald Trump directly attacked Canada yesterday specifically taking aim at the dairy industry’s supply-management system. He threatened to tear up the North American Free Trade Agreement (NAFTA) unless there were substantial changes to what he called a “very unfair” system and he called trade rules between Canada and the U.S. a “complete and total disaster” for the U.S.

So much for just ‘tweaking’ trade ties

Trump’s comments were a stunning departure from remarks he made when he met with Canada’s Prime Minister Justin Trudeau in February. At the time, he said trade between Canada and the U.S. needed “tweaking.” Nevertheless, Canada deployed cabinet ministers, premiers and various trade officials to the U.S. to explain how beneficial NAFTA is for all countries involved—Canada, the U.S. and Mexico.

It is an ongoing effort and a crucial one since the U.S. is by far Canada’s biggest trading partner and that trade has been responsible in great part for Canada’s prosperity.

The elephant and the mouse

How much leverage does Canada have in renegotiating a trade deal with the U.S.? “The U.S. is the elephant. We’re more the mouse,” says Bernie Wolf, a professor economics and international business at York University. “However, saner heads may prevail because these three economies–Mexico, Canada and the U.S.–are so intertwined in terms of the supply chain that it would be very, very costly to the U.S. to tear up NAFTA.”

Wolf says Canada’s dairy supply-management system has been attacked by other countries like New Zealand and Australia and it will be breached by the trade agreement with the EU which will allow European cheeses into Canada. He thinks the system will eventually have to be dismantled with compensation worked out for Canadian farmers.

However, Canada continues to defend the system. After Trump’s attack, Canada’s ambassador to the U.S. sent a letter to the governors of Wisconsin and New York saying Canada’ dairy policy is not the cause of financial losses for U.S. dairy farmers. And he has granted interviews defending it.

Dairy policy aside, Wolf says the current U.S. administration is “absolutely determined to be protectionist and that is bad news for Canada and the world.

“It (the U.S. administration) either doesn’t know or has forgotten what happened in 1930 when the U.S. became isolationist with the Smoot-Hawley Tariff which put up tariff barriers greatly. That protectionism clearly contributed to the depth of the Great Depression.

“I’m not saying we’ll have another great depression, but this is surely not going to be helpful to economic growth and to prosperity in the world. It will have the opposite impact.” Wolf adds this causes him “great anxiety.”

In the interim, the Canadian government is vigorously pursuing trade agreements with other countries and Wolf applauds it for that.