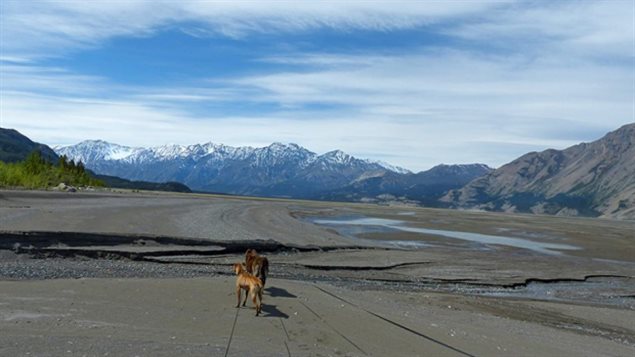 Looking up the Slims River Valley, from the south end of Kluane Lake. The river used to flow down the valley from the Kaskawulsh glacier.
Photo Credit: Sue Thomas

Researchers have documented the first case of “river piracy” or stream capture, in modern times.

It’s not a theft, rather a geological term to indicate the source of one river has been taken over, shifter or diverted, to another.

The discovery was made in the Yukon at the Kaskawulsh glacier which has melted so much that the major flow of meltwater supplying the Slims River has now taken a different route into another river.

Canadian Dan Shugar (PhD) is an assistant professor at the University of Washington-Tacoma in the U.S. where he is also director of the ‘Water, Sediment, Hazards and Earth Surface Dynamics Lab.

There are cases of river piracy or stream capture in the geological record but these are usually thousands of years old, and were often caused by geological upheavals.

Professor Shugar says this is a unique occurrence in the modern record and is attributable to climate change.

The Kaskawulsh glacier meltwater had been supplying water to the north flowing Slims which eventually ends up in the Arctic, and the south flowing Kaskawulsh which flows into the Pacific.

Suddenly however, that changed as warming climate in the past century has caused the massive glacier to retreat  up the Slims valley over a kilometre and a half and shrink in volume.

Because of that, the meltwater carved a new channel through the glacier and down a new slope southward into the Kaskawulsh River causing almost all the previously northward flow to follow the new path and thereby drying up the Slims.

Shugar says he had been advised the Slims flow had dropped but was surprised when he and a colleague got there last year they found that the Slims, previously a river of shimmering water was now gone with virtually no flow at all, just exposed sediment blown into dust storms by winds.

With no more inflow from the Slims, the level of Kluane Lake has dropped and is likely to continue to drop as water flows out from the north. This will undoubtedly cause significant changes to the structure of the lake and for the residents.  Kluane First Nations are already reporting changes to their traditional lake and Kluane river fishing grounds.

While an exciting discovery for a geoscientist, Shugar says it does signify an important warning that climate change can result in sudden and unexpected changes.