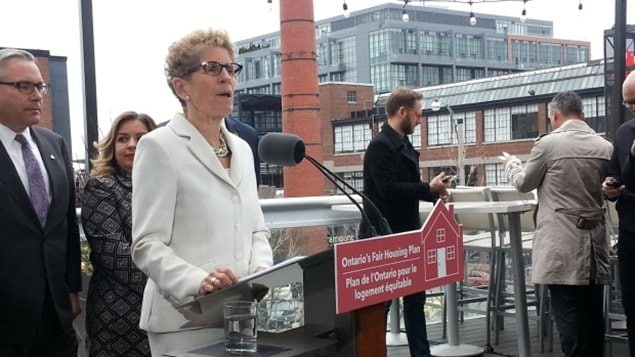 The provincial government in Ontario is introducing new measures in a desperate attempt to cool down the red-hot housing market in the greater Toronto area by taxing foreign buyers and expanding rent controls in the province.

The Non-Resident Speculation Tax will apply in the Greater Golden Horseshoe area, stretching from the Niagara region to Peterborough.

“The non-resident speculation tax has nothing to do with new Canadians and people who want to make Ontario their home,” Wynne said during the announcement at Toronto’s Liberty Village neighbourhood. “With this tax, we are targeting people who aren’t looking for a place to raise a family — they’re looking only for a quick profit or a safe place to park their money.”

After two consecutive years of double-digit gains, average house prices in the Toronto region reached $916,567 in March 2017, up 33.2 per cent from a year earlier, the provincial government said.

The province will also expand rent control to all private rental units, including those built after 1991. The government wants to ensure rents can only rise at the rate posted in the annual provincial rent increase guideline. The increase is capped at a maximum of 2.5 per cent.

The government will introduce legislation that would, if passed, include measures such as developing a standard lease with explanatory information available in multiple languages, tightening provisions for “landlord’s own use” evictions, and ensuring that tenants are adequately compensated if asked to vacate under this rule.