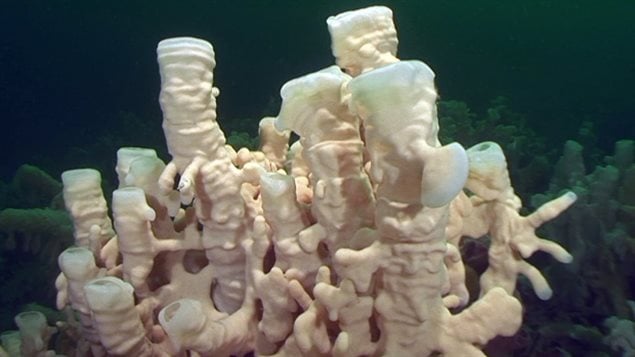 The skeletons of these sponges are made mostly of glass and each is covered by a single-cell membrane.
Photo Credit: Neil McDaniel

A team of scientists is on an expedition to investigate glass sponges which are found elsewhere but only form reefs in the cold water off Canada’s Pacific coast. The glass sponge is a living animal made mostly of glass with a membrane covering its tubular structure.

Researchers from the University of Alberta will use a robot to go to the ocean floor at Hecate Strait for a close look at the sponges and the view will be live streamed up to the boat and over the internet for all to see starting today.

“They are…very unusual,” says Sally Leys, and evolutionary biologist and scientific lead for the expedition. “This veneer of tissue that is on the skeleton is one giant cell. This cell has many nuclei and those nuclei travel around on basically railroad tracks around the whole animal.

“And because it’s a giant cell it has no barriers to electrical signalling so in fact…this group of sponges can send electrical impulses throughout the whole animal.”

The 2,410 square-kilometre area around the sponges was in February declared a protected marine area by the government and fishing is restricted there.

The researchers will investigate whether the boundaries are broad enough to protect the sponges. They will look at the effects of silt, the health of the sponges and how best to monitor them in future.

Sonar images reveal remains of  glass sponges formed over 9,000 years under the sea bed. They support the new structures which continue to grow.