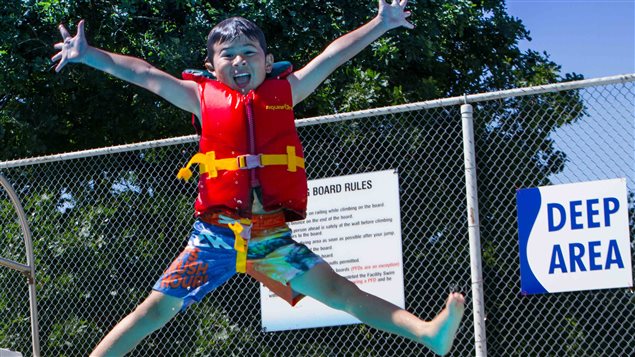 Life jackets will save you from drowning, but only if you wear them.
Photo Credit: Lifesaving Society Canada

This is a good time for the Lifesaving Society to launch its campaign to prevent the drowning deaths that occur every year in Canada. It is a holiday on the third Monday of every May and people like to celebrate the end of a long winter and the beginning of the warm weather by getting out doors. Often the activity takes place in or on water.

While water-related deaths have declined in recent years, an average of 473 people died annually in the five years up to 2013.  “In Canada, the largest age group of people who drown are…men between 20 and 49 years of age. That’s where the largest numbers are,” says Barbara Byers, public education director of the Lifesaving Society Canada.

“In terms of the drowning risk, young children specifically those under five, are one of the highest drowning risk groups. And the other group that is emerging to be larger and larger each year is that over 55-year-old age group.”

The risk with young children often involves situations where the parents or caregivers believe the children to be in a house or a building where they do not have access to the water. But sometimes someone has left a door unlocked or a child finds a way to get out.

“What we know about children, whether it’s a lake, the ocean or a pond or a pool, is that there’s almost a magnetic attraction for them to the water. The sparkling, glistening water sort of beckons to them and if they see an opportunity to get near that water they do,” says Byers.

Young children are also at risk when they are further than arms’ length away from an adult. Parents sitting on a beach may well be watching a child in the water, but looking away for a very brief time is long enough for a child to drown.

Alcohol, no life-jacket often to blame

The problem with young men is that they often engage in risky behaviour. They may risk drowning by not wearing life jackets when on boats and by drinking alcohol. While they may have no intention of falling into the water, there may be a big wave from a passing boat, a sudden change in weather, or the boat may hit an obstacle throwing occupants into the water.

Young men also may overestimate their ability to swim or be embarrassed to not join in a group of friends swimming to a raft, for example.

Older adults may also overestimate their ability and endurance, says Byers. They may have been life guards or competitive swimmers when they were young and don’t realize they do not still have the same capabilities.

‘A country with so much water’

“We’re a country with so much water. There’s more fresh water in Canada than any other country in the world. And we have our oceans on three sides,” says Byers. “And we have a cold, cold climate in Canada so when it’s warm and we’re approaching the long weekend in May we just can’t help ourselves being excited about being in the water.

Around the world, 372,000 people drown every year. They are mostly the young, the poor and the marginalized. Drowning is a leading cause of child mortality.