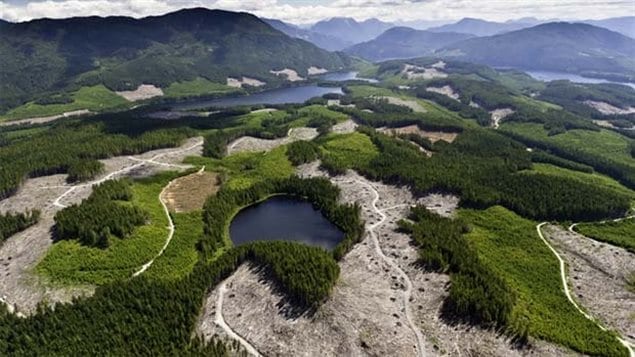 Clearcut forestry practices are one example of habitat fragmentation making it difficult to impossible for ecosystems to migrate due to changing environmetal conditions.
Photo Credit: Garth Lenz-Lighthawk-via CBC

Ecosystems: The importance of habitat connectivity

The climate is changing, and that’s changing the environment. That in turn is changing how various species which have adapted to an environment, act and react to their new and changing environmental conditions.

A new study says to help preserve existing ecosystems as they move to keep pace with changing climate, we must preserve connectivity of habitats.

Patrick Thompson (PhD) is the lead author of the research. He is a post-doctoral fellow at the University of British Columbia and a Killam Fellow, and NSERC Fellow

ListenThe idea of the research is that there is a complex web of ecological networks that are beginning to change through global warming and the resulting climate change, and due to human developments.

The research was published in the May 8, 2017 edition of the science journal Nature Ecology & Evolution, under the title “Dispersal governs the reorganization of ecological networks under environmental change,”   (abstract HERE)

The existing ecosystems and food networks are being reorganized as new elements (animals, plants, bacteria etc) are being pushed into existing areas. In some cases, species are becoming extirpated and even extinct.

Environmental change is happening far faster than most life can adapt, so moving with the environment is the only option in most cases.

We know ecosystems will move as the climate changes their traditional environment. We can already see, “greening” in the Arctic as plants begin to move into areas where the cold has previously always prevented their growth.  Plant eaters are following, and predators following them. Killer whales are also being spotted far more frequently in the far north as warmth melts the ice that had always prevented their movement northward before.

That doesn’t mean there weren’t existing ecosystems already there, rather in many cases it means that as the planet warms, plants, animals, marine life,  and fish (where possible) will follow the temperature range they are used to as it (generally) moves north or south towards the poles, or to higher elevations.

What Thompson and co-author professor Andrew Gonzalez (McGill U) found is that when various habitats are connected, the existing networks, biodiversity, and food webs have much greater chance of remaining relatively stable as they move or are displaced.

Without the habitat connectivity, the ecosystem and food networks become disrupted as some species move into new areas and others don’t or can’t. This can lead to extinctions in some cases, reorganization into new and very changed ecosystems in others.

Thompson says they can predict the stability or disruptions  depending on the interconnectivity of habitat, but not the actual effects on ecosystems which is unpredictable other than to say, great disruption of ecosystems and species is a possibility.

Thompson points out one effort towards a conservation initiative to preserve habitat connectivity which is the Yellowstone to Yukon Conservation Initiative. This non-profit organization seeks to create an interconnected system of wild lands and waters along the Rocky Mountains of North America to allow movement of relatively intact ecosystems.