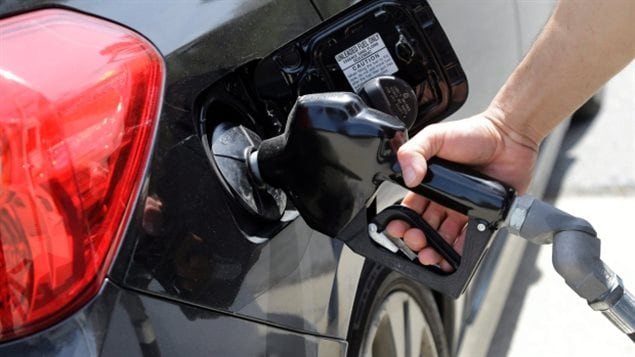 Gasoline prices declined in the month with the year-over-year increase slipping to 6.8 per cent from as high as 23 per cent in February.
Photo Credit: Elise Amendola/The Associated Press

Weaker growth in gas prices helps slow annual inflation rate to 1.3 per cent in May

Canada’s inflation decelerated last month as weaker growth in gasoline prices helped slow down the annual rate to a six-month low of 1.3 per cent in May, Statistics Canada said Friday.

Economists were expecting a modest decline to 1.5 per cent from April’s 1.6 per cent reading.

The May inflation rate reduction was accompanied by declines in electricity, bakery products and Internet access services, the agency said in its latest monthly report.

“Canadian consumer prices were even softer than soft expectations in May, taking some of the steam out of the ‘Bank-is-going-to-hike-rates-soon’ freight train,” said Doug Porter, BMO chief economist.

The data comes as the economy strengthens and the Bank of Canada prepares to make a scheduled interest rate announcement on July 12.

“The soft inflation environment is likely enough for the Bank of Canada to hold off on raising interest rates at its next meeting in July,” James Marple, senior economist with TD, said in a note to clients. “Nonetheless, a continuation of above-trend economic growth should reduce slack and help turn inflation higher over the second half of this year, allowing the Bank of Canada to nudge up the overnight rate in October.”

The latest consumer price index also showed lower readings for two of the Bank of Canada’s three preferred measures of core inflation, which the central bank will scrutinize ahead of its interest rate decision.

Governor Stephen Poloz recently signalled he’s moving closer to a hike in the benchmark interest rate. Many analysts now believe the bank will start moving the rate upwards from its historically low level of 0.5 per cent before the end of the year.

“We don’t see this run as changing the broader narrative of a generally improving Canadian outlook which needs less monetary accommodation, although it does suggest that July is too soon for the Bank of Canada to raise interest rates,” said CIBC economist Nick Exarhos. “We’re maintaining our forecast for an October move.”

Gasoline prices declined in May with the year-over-year increase slipping to 6.8 per cent from as high as 23 per cent in February.

But despite the slower price growth, gasoline remained one of the biggest upward contributors to inflation last month, along with other costs associated with shelter and transportation.

Food prices also started to head back up, rising 0.3 per cent on month to month basis and now are just 0.1 per cent  below year-ago levels. Shelter prices rose 1.9 per cent and transportation increased 2.2 per cent.

Year-over-year inflation excluding food and energy prices fell for a fourth consecutive month, hitting a three-year low of 1.4 per cent in May.

“Canada’s inflation rate is now not only well below Britain and the U.S., but it is now also lower than that in China and the EU,” said Porter.