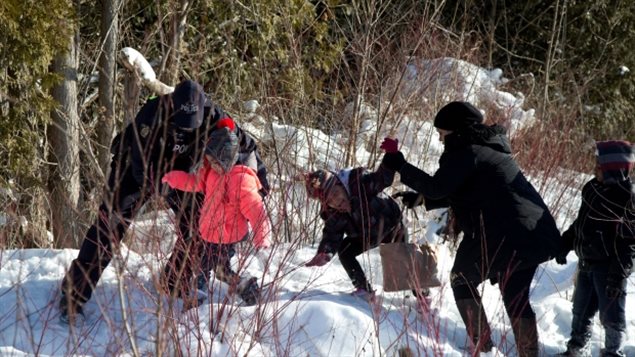 Refugee and human rights advocates are renewing calls for Canada to suspend an agreement it has with the United States governing the treatment of refugee claimants.

Under the Safe Third Country Agreement between the two countries refugee claimants must see asylum in the first safe country they arrive in. That means that refugee claimants coming to Canada from the U.S. through official border crossings are turned back.

That has led many to come through the border in other places, sometimes in remote locations and under dangerous conditions. One asylum-seeker lost all his fingers due to frostbite last winter.

Amnesty International Canada and the Canadian Council for Refugees have written a brief calling on the Canadian government to suspend the agreement. There have been similar calls from many other refugee and human rights organizations and legal academics on both sides of the border.

U.S. is not a ‘safe’ partner, say advocates

“We are shocked and disappointed that the Canadian government continues to hold to the view that the US is a safe partner for refugee protection,” said Alex Neve, Secretary General of Amnesty International Canada as quoted in a news release. “That was not true before President Trump took office and it has become abundantly clear that his presidency is characterized by utter disregard for the safety and rights of refugees and migrants. Our brief convincingly makes the case for the Safe Third Country Agreement to be suspended immediately.”

The brief is said to highlight “fourteen major areas in which US practice falls short of international and Canadian legal standards.”