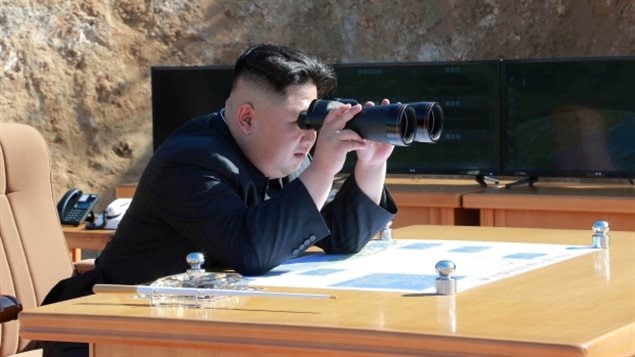 North Korea’s test of a missile it suggests is capable of reaching the U.S. will top the agenda with world leaders but it is only China that has the clout to influence the country, says a Canadian analyst. Although it’s not clear this missile is as capable as North Korea claims, it has caught the attention of the world.

‘A very serious escalation of tensions’

The North Korean launch was the first of its kind and represents “a clear violation of UN resolutions and a very serious escalation of tensions on the Korean peninsula and especially a game-changer in terms of the American policy on North Korea,” says Tina Park, vice-president of the NATO Association of Canada (a civilian organization linked to NATO) and a fellow at the University of Toronto. The United States and South Korea responded by firing their own surface-to-surface weapons in a military exercise.

The United States has asked for an emergency closed-door session of the UN Security Council to address the latest developments. If that happens, Park thinks the best outcome would be a veto-free resolution calling on the key players—the Unites States, the Republic of Korea, Japan, China and Russia–to work together on a “coherent cooling off plan where sovereignty of both Koreas is guaranteed and substantive talks are offered on investment, sanctions management and constructive economic assistance for North Korea.”

The issue will likely top the agenda at the meeting of the G20 nations this week. Park says the best outcome there would be a firm resolve and intolerance of any North Korean aggression, as well as a call for the suspension of tests and exercises in the region and a call for a new regional peace framework. She notes that historically, the U.S., China and Russia have not agreed on policy regarding the Koreas, but that now would be a good time for them to do so.

Canada has historical ties to the Korean Peninsula having been the country with the third largest troop contribution to the Korean War in the 1950s. It continues to participate in exercises in the region and is a close ally of the United States.

Two of its frigates were in Korean waters to celebrate the July 1st anniversary of Canadian confederation and they took part in joint exercises run immediately after the latest North Korean missile test.

The Canadian government was quick to condemn the test yesterday. A statement issued by the minister of foreign affairs “unreservedly condemns North Korea’s ongoing ballistic missile tests, which are a direct threat to regional and international peace and security, and continues to underline the need for a unified international response.” It also vowed to “continue its steadfast support for South Korea, Japan and other partners in the region” and to encourage efforts to enhance peace and security.