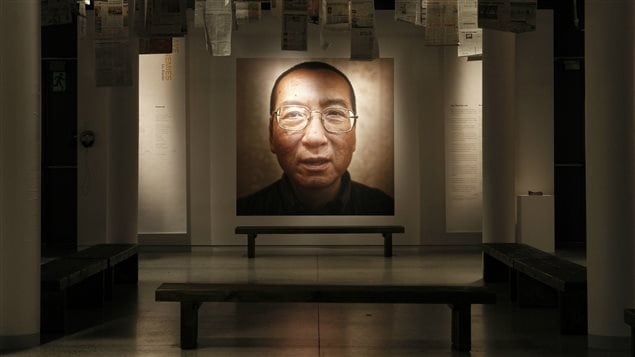 A picture of 2010 Nobel Peace Laureate Liu Xiaobo is seen at an exhibition at the Nobel Peace Center in Oslo December 10, 2010. Liu died of terminal cancer on Thursday, July 13, 2017, shortly after being transferred from jail to a civilian hospital for palliative care.
Photo Credit: Norsk Telegrambyra AS

Canada quietly expressed its sadness at the passing of Chinese dissident and Nobel Peace Prize laureate Liu Xiaobo who died on Thursday shortly after being transferred from jail to a civilian hospital to seek treatment for advanced stages of terminal cancer.

“Terribly sad that this champion of human rights has died,” Foreign Affairs Minister Chrystia Freeland tweeted from her personal Twitter account. “We mourn his loss but his message of hope and freedom will endure.”

Terribly sad that this champion of human rights has died. We mourn his loss but his message of hope and freedom will endure. #LiuXiaobo

Liu died from multiple organ failure, the authorities said, having not been allowed to leave the country for treatment for late-stage liver cancer as he wished.

Liu, 61, was jailed for 11 years in 2009 for “inciting subversion of state power” after he helped write a petition known as “Charter 08” calling for sweeping political reforms.

He was recently moved from prison to a hospital in the northeastern city of Shenyang to be treated.

Ottawa’s cautious reaction to Liu’s death came as Canada’s Governor General David Johnston is on a state visit to China from July 10 to 14, accompanied by a large delegation of Canadian politicians and business leaders.

The visit is part of an ongoing effort by the Liberal government of Prime Minister Justin Trudeau to deepen economic ties with China as it faces increasingly protectionist policies of its main trading partner, the United States under Trump administration.

China too is eager to expand its trade relationship with Canada and has been pushing Ottawa to begin negotiations on a free trade agreement between the two countries.

Chinese President Xi Jinping met with Johnston in Beijing on Thursday, urging both countries to expand cooperation in such areas as trade, law enforcement, technology and culture, and launch negotiations on a free trade agreement at an early date, reported the official Chinese Xinhua agency, which had no mention of Liu’s passing.

My meeting with President Xi Jinping reinforced the longstanding relation between #Canada and #China. #GGChina pic.twitter.com/Tda0MgSJhy

I once again had the opportunity to discuss #Canada–#China relations with Premier Li Keqiang. #GGChina pic.twitter.com/gNdMZXogYP