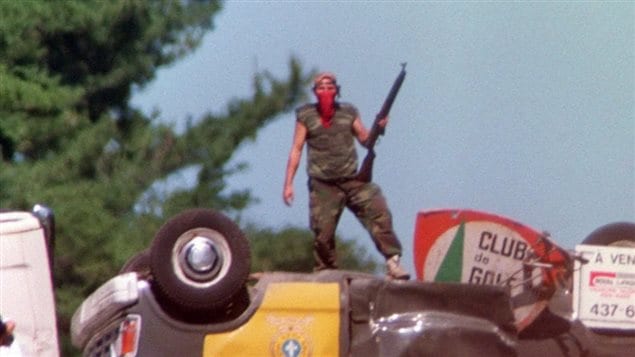 The crisis began in early 1990 when the small town of Oka Quebec, just off the north east tip of Montreal Island where the Ottawa River empties into the Lake of Two Mountains.

The town wanted to expand a golf course and housing development onto land which had been long claimed by the local Mohawk reserve as theirs.

The two sides dug in and, the situation quickly boiled over into a blockade a standoff, and almost 27 years ago to the day, violence. resulting in a 15-minute gun battle and the death of a police officer with the Quebec provincial police.  The blockade continued and soon after the army was called in. The crisis was only calmed months later in September after intense negotiations which resolved the standoff but did not solve the land issue.

However, the situation was never properly resolved, and now appears set to ignite once more.

A development project has begun on lands still in dispute and the Mohawk of the Kanesatake are furious.

The planned 400 home development is partially completed on land bordering “the Pines” which was the site of the original dispute. Some of the pine trees have been cut, which the Mohawk say is violating the agreement which calmed the original  crisis.

A group of Mohawk have begun protesting saying they will stop any further building.

A tense exchange occurred on Wednesday between protesters and the town mayor.

The mayor said the developer had an agreement with the band council in 2003, but the protesters say the people of Kanestake were not involved and are not prepared to give up land. The mayor said his hands were tied and stopping the development would open the town to a lawsuit from the developer.

Serge Simon, Mohawk chief says there is no such agreement on file, adding it would have been the municipality that would negotiate with them, not a developer.

The Mohawk are calling on Prime Minister Trudeau to intervene. Simon has said he hopes the situation doesn’t escalate and wants a moratorium in place on any further development until the situation is resolved.