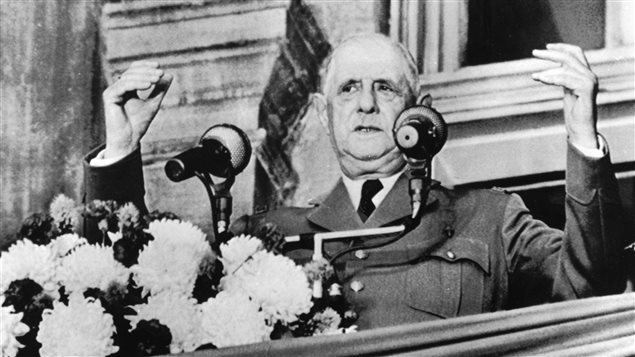 50 years after de Gaulle speech, Quebec is no closer to independence

The words “Vive le Quebec libre,” (Long live free Quebec) uttered by de Gaulle at the end of an impromptu speech to a large crowd of enthusiastic supporters during his state visit to Canada on the occasion of the Montreal Expo 67 world fair and Canada’s 100th anniversary helped trigger events that still reverberate in Canadian politics.

The July 24, 1967, speech and the political fallout from it propelled Quebec’s small independence movement to international fame and gave it a sense of credibility both at home and abroad, says Bernard St-Laurent, a well-known Quebec-based broadcaster and political analyst.

“There is no doubt that at the time it was seen as having given the sovereignty movement a legitimacy it didn’t have before,” St-Laurent said.

That was one of the reasons the government of then-prime minister Lester B Pearson acted so forcefully, making clear that the 76-year-old de Gaulle was no longer welcome in Canada, St-Laurent said.

“I considered it a meddlesome intervention by an old man who couldn’t tell the difference between the British and the Canadians, and especially the English-Canadians,” Heinbecker said.

The speech stirred up passions and a bitter feeling of betrayal among Canadians, especially those who had fought or had lost family members during two world wars in France.

The bitterness continued even after de Gaulle’s death in 1970, said Ferry de Kerckhove, another former high-ranking diplomat who worked on the French desk of Canada’s Foreign Ministry at the time.

“And I can tell you that the one that I drafted was single-handedly rejected as being too generous,” he added.

At the time of de Gaulle’s speech Quebec’s separatist movement consisted of two main branches: one that believed in achieving independence through revolutionary means, including terrorism, and one that sought a democratic and peaceful pathway to independence, said St-Laurent.

In 1968, under the leadership of the charismatic nationalist leader Rene Levesque, elements of the peaceful separatist movement merged to create the Parti Quebecois (PQ), the leading sovereignist political party in Quebec.

But it wasn’t until 1976 that Levesque was able to win his first mandate and form a government that ended up transforming the French-speaking province and leading it to its first attempt to secede from Canada.

The clear result of that 1980 referendum was a 60 per cent “no to separation,” St-Laurent said.

The PQ was much more successful in instituting reforms to protect the French language and culture in the province largely by adopting laws that cemented the role of French as the official language in Quebec.

But the showdown with the federal government sharpened when in 1982 Quebec refused to sign the Canadian constitution. To this day it is the only province that does not formally adhere to the country’s basic law.

Frustration in Quebec over failed constitutional talks and a bruising national debate over official recognition of the province’s distinct status, led to another victory of the PQ and a second referendum in 1995.

Quebec nationalists came tantalizingly close to winning that time, but after an emotional and controversial campaign the “No” side squeezed in a narrow victory by a majority of only 50.58 per cent.

Support for sovereignty declined afterwards, driven in part by changing demographics and somewhat ironically by the PQ’s success in protecting the French language.

The PQ’s language policies, which among other things require that all immigrants to the province send their children to French schools, eroded support for independence by weakening concern over the future of French language and culture in the province, which was one of the major drivers of nationalist feelings, said St-Laurent.

While about one-third of Quebecers remain staunchly pro-sovereignty, St-Laurent said it is unlikely they will muster enough support from the rest of the population to secede.

“If there is no trigger, no symbolic event that is powerful enough to change the dynamic that is happening now, to mobilize Quebecers, then it would be very difficult to imagine how it will achieve any kind of success,” St-Laurent said.

With files from digital archives of CBC News