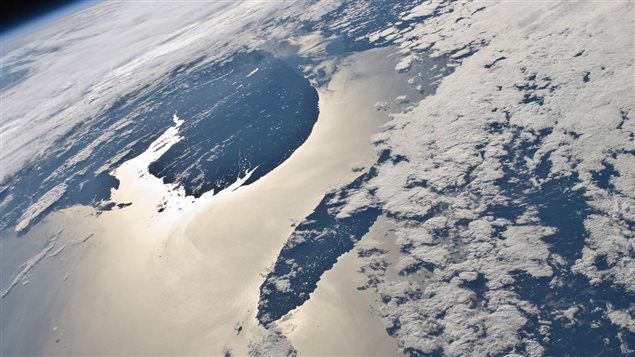 This high-oblique view of the Gaspe Peninsula and Anticosti Island with sun glint on the Gulf of St. Lawrence and Chaleur Bay, Canada, was photographed by an Expedition 24 crew member on the International Space Station.
Photo Credit: NASA

Quebec halts plans to drill for oil on Anticosti Island

After years of protests by environmental groups, the provincial government of Quebec announced Friday that it’s ending all gas and oil exploration and exploitation on a picturesque island in the Gulf of St. Lawrence.

The decision to permanently stop hydrocarbon exploration on Anticosti Island, located about 910 kilometres northeast of Montreal, is part of the government’s efforts to have the island listed as a UNESCO world heritage site, said Pierre Arcand, Quebec’s Minister of Energy and Natural resources.

“This initiative will help to protect and preserve the exceptional natural character of Anticosti Island and ensure its continuity for all Quebeckers,” Arcand said.

Negotiations are still underway with Petrolia and Trans American, the provincial government said.

Back in January of this year, the Quebec government gave its consent to an application by Anticosti municipal authorities to get federal heritage designation for the island. Proposals will be reviewed by a departmental advisory committee of Parks Canada.