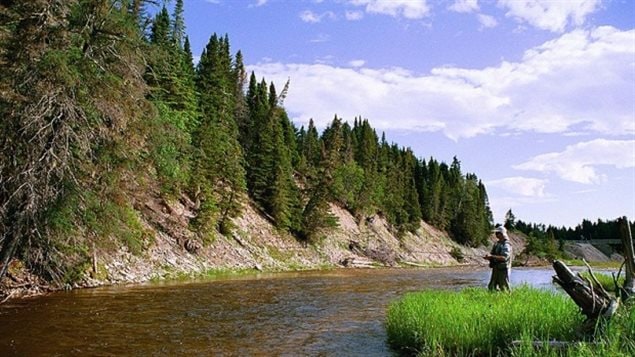 Anticosti has become the site of a heated debate over oil and gas exploration.
Photo Credit: Creative Commons / R. Rancourt

The island of Anticosti, in Gulf of the St. Lawrence, will be one of ten sites in Canada suggested for UNESCO World Heritage status.

The Canadian government, through Parks Canada, will champion 10 applications to the United Nations body for the first time in 10 years.

Canada is home to 18 UNESCO sites currently, which include places such as the Canadian Rocky Mountain Parks in Alberta, and Gros Morne National Park on the east coast of Newfoundland.

Anticosti Mayor, John Pineault, is an enthusiastic supporter of the initiative referring to the island’s designation as the “Galapagos of the North”.

He says it’s “an island that’s about 8,000 square kilometres sitting in the middle of the Gulf of St. Lawrence that… on one side you have the Gaspe Peninsula, on the other side you have the north Shore, and geologically the island has nothing to do with either one.”

Pineault is aware of its geological history, emerging about 450 million years ago during another mass extinction, and unlike other similar periods, geologists don’t know why.

He says there are fossils that don’t exist anywhere else, as well as flora and fauna. And even sea birds that are close to extinction elsewhere thrive on Anticosti.

Even the name is a bit of a mystery; it may originate in the language of the Montagnais people, meaning “there where we hunt bears”, however, there are no bears now, hunted out of existence during the 19th century. Or, the name may have come from the Portuguese explorers and fishermen who came ashore before the French.

And surrounding the island is a rich maritime history. Pineault describes it as the graveyard of the Atlantic with hundreds of shipwrecks off its shores.

It is for these reasons he, and many others, feel the island should be recognized as a UNESCO World Heritage site.

With 27 salmon rivers and an abundant herd of white-tailed deer, the island evolved from its natural state, to the private game reserve of Henri Menier, a wealthy chocolate baron from France at the end of the nineteenth century, to the world’s largest private woodlots under Consolidated Bathurst in the 20th century to a place of opposing visions these days.

“For the last hundred years the island has always lived from hunting and fishing activities and tourism and that we feel is really the way things should go into the future.” John Pineault says

“Should there really be oil, because there’s never been any taken out of the ground here and there’s been exploration here since 1910, it would cost about 185 dollars a barrel to extract it.”

In a recent interview with CBC in Quebec City, Pineault said, “Even if there wouldn’t have been any oil and gas exploration on the island … we still would have taken the occasion to present ourselves as a candidate to UNESCO,”

But he looks to UNESCO for help. “If Anticosti would become a World Heritage site it would be awful hard to drill here”

The island municipality joined with the Innu First Nation, requesting an injunction to stop the drilling. It will be heard in the month of November.

Earlier this week it was announced that Anticosti Hydrocarbons will soon begin the deforestation work and the levelling and compacting of the sites.

It remains to be seen if the two visions for the future can co-exist.