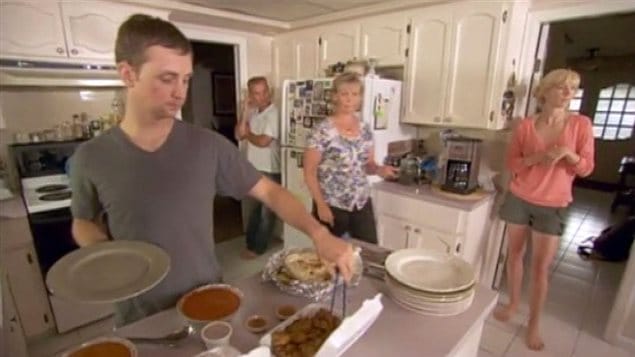 A new survey shows most parents are willing to pay thousands of dollars to help move their adult children out of the parent’s homes.
Photo Credit: via CBC

Here’s money, I love you, now please move out

It’s a fact of modern life where the ever increasing cost of living is changing life styles.

A new survey by the Canadian Imperial Bank of Commerce (CIBC) shows Canadian parents are willing to give thousands of dollars to their adult children to move out of the house.

It wasn’t long ago that the term “boomerang kids” was coined for the phenomenon of adult children moving back home.  There is also the case of children who simply never left.

The  CIBC poll and report (bottom) shows that a majority of Canadian parents (76%) with a child age 18 or over would give money so the child could move out of the parent’s house, get married, or move in with a partner.

Given the option, about two-thirds of parents say they’d rather give cash to the adult child than have the child and spouse move in with them.

In Canada, unlike the U.S., there is no “gift tax” so financial advisors say if you have lots of money, the kind you’re unlikely to spend in your lifetime, you should consider “gifting” to kids.

Jamie Golombek, Managing Director, Tax and Estate Planning,  CIBC Wealth Strategies Group says, “When you gift during your lifetime, you’re able to enjoy seeing your beneficiaries use the money while at the same time reaping potential tax savings opportunities,” Mr. Golombek says. “In addition, by gifting assets before you die, these assets will not be subject to probate fees because they will not be part of your estate.”

When it comes to gifting their own money or assets, over half (56 per cent) of boomer parents who have given or plan to give a significant gift or an early inheritance say they’d feel obligated to give to every child or grandchild (73 per cent), although not necessarily the same amount. Most wouldn’t attach any strings to the gift; 60 per cent say it’s none of their business what their adult kids do with the gift.