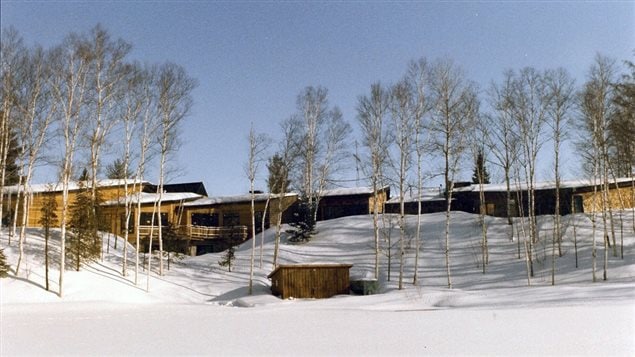 Le Studio, during winter, a wonderland, nestled in the Laurentian mountains near the town of Morin Heights, north of Montreal, was destroyed by fire this morning.
Photo Credit: www.andreperrystudios.com

Le Studio, the storied recording centre where many great songs and albums were produced for some of modern music’s biggest names, went up in flames early this morning.

Built by legendary recording engineer and producer André Perry, it was considered one of the best recording studios of the 1970s and ’80s.

“It was like the United Nations. I had people from London, New York, Quebecois, all over the world”

David Bowie, The Police, Cat Stevens, Chicago and Canadian super-group Rush, are just some of the artists and groups that worked with Perry.

The international profile began with John Lennon and Yoko Ono and their ‘Bed-In’ for Peace at Montreal’s Queen Elizabeth Hotel in 1969.

André Perry was invited to record “Give Peace a Chance” in the hotel room. Lennon was so grateful for Perry’s finished product that he credited the sound engineer and producer on the album, including Perry’s address.

“It was like the United Nations. I had people from London, New York, Quebecois, all over the world,” Perry told Radio-Canada.

Perry and his partner, in life and business, Yael Brandeis, operated the creative refuge and hosted artists such as the Bee Gee’s, Bryan Adams, and Roberta Flack.

About 65 kilometres north of Montreal, the studio was closed in 2008 and over the years it deteriorated and  was vandalized.

This morning the Quebec police force received a call about the fire around 5:30 a.m.

Firefighters says there’s evidence it may have been deliberately set, according to Radio-Canada.

Investigators with the Sûreté du Québec are working to determine the cause of the fire.