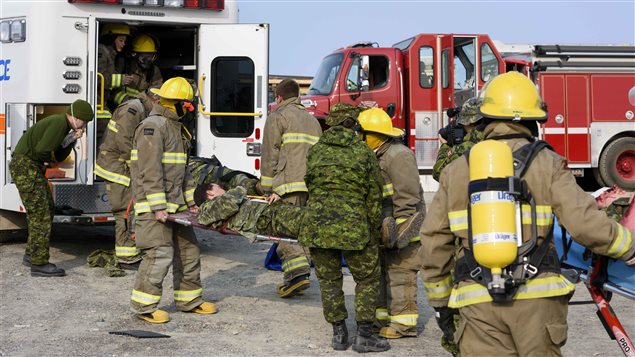 Firefighters from Rankin Inlet, NU assist a simulated casualty on August 22, 2017 during a scenario on Operation NANOOK to test the whole of government response to an emergency in Canada’s North.
Photo Credit: Cpl. Dominic Duchesne-Beaulie

Every year for the last decade the Canadian military has conducted summer exercises in the Arctic to increase its ability to operate in the North and respond to various threats and situations, ranging from military and security threats to search and rescue operations.

But this year, Operation NANOOK, Canada’s largest annual summer exercise in the Arctic, focused in large part on responding to a large-scale hazardous chemicals fire in a remote Inuit community.

The exercise in Rankin Inlet focused on the scenario of a large fire and explosion aboard a resupply barge containing hazardous chemicals that cause major contamination and force the evacuation of the small hamlet, said Maj. Josée Bilodeau, the spokesperson for Joint Task Force North.

According to the scenario, various levels of civilian authorities and the military are called to deal with deaths and injuries caused by the fire; stress on emergency services; impacts of a toxic smoke plume generated by the fire; missing persons who must be located out on the tundra; an evacuation and sheltering problem, temporary suspension of airport operations; and an outbreak of a gastro-intestinal infection at the temporary shelter for evacuees.

We’re in this together! @CanadianForces members work with first responders in Rankin Inlet during a simulated emergency as part of #OpNANOOK pic.twitter.com/V50QNusBJi

“Operation NANOOK 2017 will provide a unique opportunity for multiple agencies to work together to combat a notional threat to the security of the population of the Hamlet of Rankin Inlet,” Brig.-Gen. Mike Nixon, Commander of Joint Task Force North, said in a statement.

“The benefit of multi-agency planning, coordinated deployment and focused execution is enormous. It permits development of relationships and understanding of capabilities that is essential to ensure a timely response to a real life crisis.”