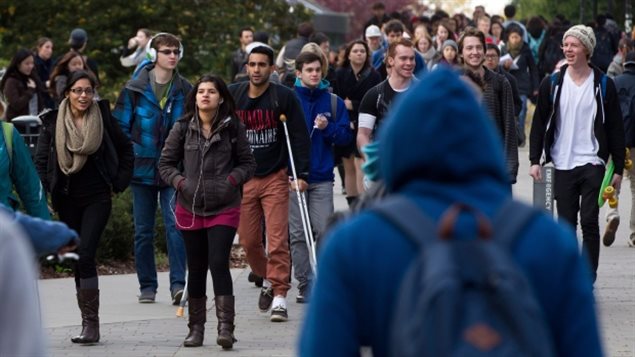 Most Canadian students are worried they will not get a job after completing an undergraduate degree.
Photo Credit: Darryl Dyck/The Canadian Press

An expensive bachelor’s degree is not enough: survey

A majority of Canadian post-secondary students do not think they will get a job after spending tens of thousands of dollars to get their first degree. A poll by the CIBC, a major Canadian bank, found 74 per cent of students think they will need more training in spite of having spent an average of $14,000 for each year of post-secondary education and having an accumulated debt of $30,000.

“There’s been a 30 per cent increase in enrollment in the high-paying career, things like business and what we call the STEM fields. Those are science, technology, engineering and math, but the problem is that these have seen the fees go up and almost double the pace of other courses. And that’s why students are graduating with high levels of debt,” says Jamie Golombek, managing director of tax and estate planning with CIBC wealth strategies group.

Golombek concludes that Canada’s post-secondary education system is not flexible enough in that students either follow an academic track at university or pursue a vocational program at a college. He says students would like to have an option of taking a combination of both.

By way of advice, he says students should start saving early for their education, they should pursue scholarships, bursaries and grants, they should map out their educational paths to employment and what it will cost. Golombek adds that parents can help early on by setting up a special savings account to which they may contribute $2,500 per year and the government will add 20 per cent of that contribution..