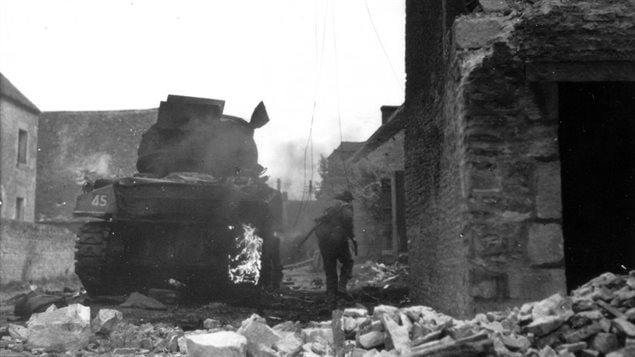 Shermans of C Squadron, the South Alberta Regiment during heavy fighting in the St. Lambert-Sur-Dives area on the 19th of August 1944. C Squadron formed a battlegroup with B company, The Argyll and Sutherland Highlanders of Canada (Princess Louise’s Own) and suffered heavy casualties defending the area against furious assaults by the 2nd Panzer Division attempting to enable a breakout from the Falaise Gap
Photo Credit: Library and Archives Canada PA132192

It is the stuff of blockbusters, and should be an heroic and dramatic action-packed feature film, of an that surely shortened the war. But, in typical Canadian fashion almost no-one knows about it.

During WWII, a small Canadian force of a dozen or so tanks, and a couple hundred infantry in spite of being massively outnumbered, succeeded capturing the town of St Lambert knocking out German tanks, artillery, armoured vehicles and accepting the surrender of the over 2,000 defenders.

His small battered force held the town against desperate counterattacks and while thousands of trapped Germans did make it through Allied lines, Curries force successfully blocked the escape from the Falaise pocket of a major segment of the German army leading to the capture of some 50,000 German soldiers, with their tanks and guns.

For his actions, Canadian Major David Currie was awarded the Victoria Cross, the highest honour for valour in the Commonwealth.

That medal is now up for sale, and will be auctioned tomorrow (Sept 27-28) through British auction house Dix, Noonan and Webb

The Victoria Cross and medal group was purchased from Currie’s widow in 1989. Considered Canadian heritage property, a cultural property export permit must be obtained if a foreign buyer wished to take them out of Canada.

‘In Normandy on 18th August, 1944, Major Currie was in command of a small mixed force of Canadian tanks, self-propelled anti-tank guns and infantry which was ordered to cut one of the main escape routes from the Falaise pocket.

This force was held up by strong enemy resistance in the village of St. Lambert sur Dives and two tanks were knocked out by 88 mm guns. Major Currie immediately entered the village alone on foot at last light through the enemy outposts to reconnoitre the German defences and to extricate the crews of the disabled tanks, which he succeeded in doing in spite of heavy mortar fire.

Early the following morning, without any previous artillery bombardment, Major Currie personally led an attack on the village in the face of fierce opposition from enemy tanks, guns and infantry and by noon had succeeded in seizing and consolidating a position half-way inside the village.

During the next 36 hours the Germans hurled one counter-attack after another against the Canadian force but so skilfully had Major Currie organised his defensive position that these attacks were repulsed with severe casualties to the enemy after heavy fighting.

At dusk on 20th August the Germans attempted to mount a final assault on the Canadian positions, but the attacking force was routed before it could even be deployed. Seven enemy tanks, twelve 88 mm. guns and forty vehicles were destroyed, 300 Germans were killed, 500 wounded and 2,100 captured. Major Currie then promptly ordered an attack and completed the capture of the village, thus denying the Chambois-Trun escape route to the remnants of two German armies cut off in the Falaise pocket.