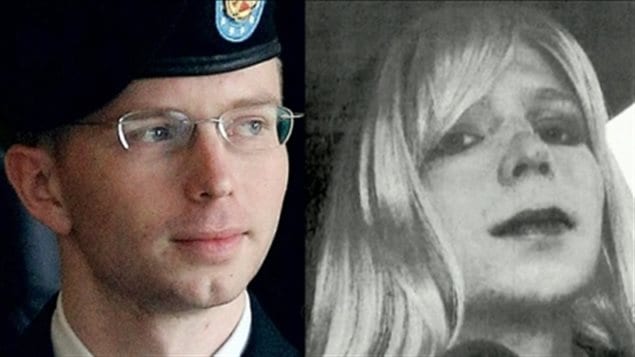 Chelsea Manning, also shown in an earlier part of her life as Bradley Manning, says she has been barred from Canada.
Photo Credit: cbc.ca

Chelsea Manning, hailed as a heroic whistleblower by some and a heinous traitor by others, says she was barred from entering Canada last Friday.

In a message on social media, Manning says she was told she was barred permanently.

Manning, who is now 29, has long been a controversial figure.

As a U.S. military analyst, known at the time as Bradley Manning, she handed down the largest breach of classified information in U.S. history for which she was later sentenced to 35 years in prison.

Earlier this year, President Barack Obama shortened her sentence and Manning, a trans woman, was released after serving seven years in a military prison.

In a statement the day after sentencing in 2013, Manning said she had a female gender identity since childhood, wanted to be known as Chelsea, and wanted to begin hormone replacement therapy.

Denied treatment by the U.S. military, she attempted to commit suicide twice and was placed in solitary confinement for long stretches.

Despite the opposition from military authorities, she completed her gender transition in prison under a private medical insurance plan that she said cost “only $600 over two years.”

Calling Manning’s alleged border denial “unacceptable,” a candidate for the leadership of the federal New Democratic Party, Niki Ashton tweeted that “the government must fix this and allow her into the country.”