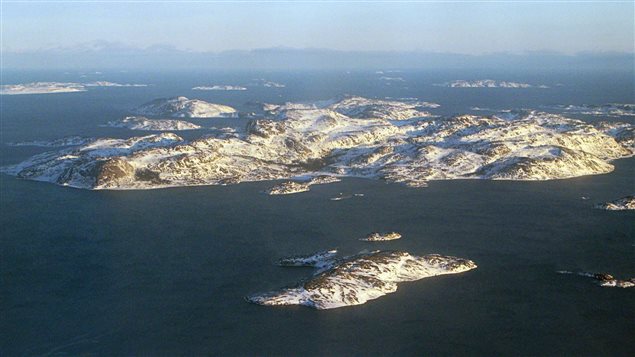 An aerial view of the North Coast of Labrador between Nain and Natuashish, N.L. on Wednesday, Dec. 5, 2007.
Photo Credit: PC / Andrew Vaughan

The Inuit in northern Labrador and the federal government signed a deal Thursday evening that will see the Inuit use their traditional knowledge to develop Canada’s first Indigenous protected marine area off the coast of Labrador at the eastern approaches to the Northwest Passage.

Two federal cabinet ministers and Johannes Lampe, the President of the Nunatsiavut Government, announced Friday that they have signed a Statement of Intent, a key step in advancing the Imappivut initiative put forward by the Inuit self-governing region in northeastern Labrador.

The Imappivut initiative – which means ‘Our Waters’ – includes the creation and co-management of marine protected areas that will safeguard a stretch of coastline longer than the State of California, the announcement said. 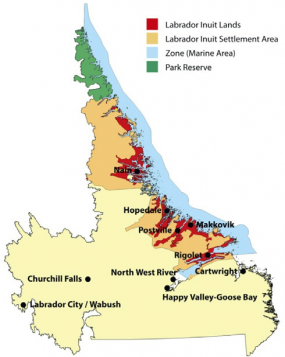 “The Imappivut initiative is about recognizing Labrador Inuit connection, knowledge and rights to our ocean,” Lampe said in a statement. “It is about respecting our history and current needs by partnering with the Government of Canada to develop a management plan that ultimately improves the lives of those who depend on the water and the ecosystem itself.”

Environment and Climate Change Minister Catherine McKenna said her government was proud of this “historic partnership with the Nunatsiavut Government.”

“Together, we will not only help protect a region feeling the very real impacts of climate change – but through environmental stewardship, training, and employment – will provide economic opportunities for Inuit communities along the coast,” McKenna said in a statement.

The plan is expected to address community concerns over increased shipping, potential offshore oil and gas exploration, commercial and subsistence fisheries, and conservation of unique habitat at a time when climate change and the retreating sea ice are opening up the region to increased human activity, said Darryl Shiwak, the Minister of Lands and Natural Development for the Nunatsiavut government.

The planned marine management area will stretch 12 nautical miles into the sea along the coastline that is part of the Inuit marine zone under the Labrador Inuit Land Claims Agreement, he said.

“This 12 nautical miles off the coastline is what Labrador Inuit use to hunt, fish, this is sort of our highway in the summer and wintertime, it’s what we use to navigate,” Shiwak said in a telephone interview from Nain. “It’s important for Labrador Inuit and Inuit all across the Nunangat to protect the wildlife and the environment.”

It’s now up to the Inuit communities along the coastline to tell the Nunatsiavut authorities what they want to be included in the plan, Shiwak said.

There is also potential for the Inuit to partner with the federal government in managing the marine area stretching up to 200 nautical miles into the sea, up to the edge of Canada’s Exclusive Economic Zone, Shiwak said.

“That’s something that’s got to be developed, we’re not quite sure what would go into the plans yet,” Shiwak said. “But that’s what this signing of this Statement of Intent signifies: us talking about this, moving forward how we talk to the federal government in putting what Labrador Inuit want to into the plan with regards to this area.”

The Nunatsiavut government hopes to complete the negotiations and sign the final agreement by December 2018, he said.

Louie Porta, the vice-president of Oceans North, an ocean conservation group, said the Statement of Intent demonstrates that the Liberal government’s path towards realizing its national marine conservation commitments is directly tied to supporting the vision Indigenous people have for their homeland.

Oceans North has contributed to Nunatsiavut Government Immapivut initiative over the past two years by supporting research and local engagement, he said.

“My greatest hope for this plan is that it brings definition to the idea of a conservation economy by fostering new training and education opportunities for Nunatsiavumuit through coastal stewardship programs,” Porta said in an emailed statement. “I also think the Nunatsiavut Government has a chance to show the world how to advance the idea of Indigenous protected areas in the marine environment.”