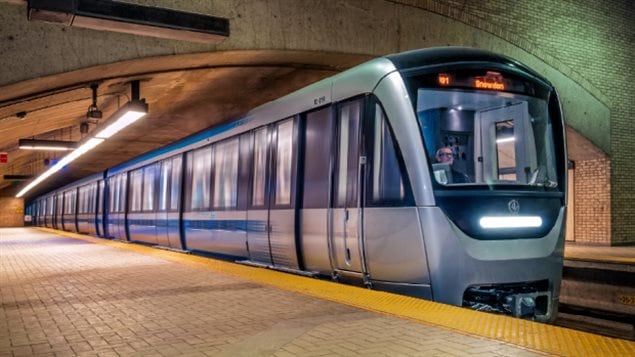 The STM recently announced that more new Azur cars will be added to the Metro's fleet to replace the 50 year old original trains.
Photo Credit: STM

Free public transit was a rallying cry for many citizens in Montreal back in the 1970’s when it was Canada’s largest city.

At the time, its metro (subway) system was one of the best in the world and the bus routes moved people effectively.

Today, the metro system has had only minor expansions, the same subway cars still make up the majority of the fleet, and breakdowns and delays are becoming more and more common.

Jason Prince, a Montreal Urban Planner says it is time to make public transit free to the more than a million people in Montreal who use it.

With his co-editor, Judith Dellheim of Germany, Price is releasing a book this week entitled: ‘Free Public Transit: And Why We Don’t Pay to Ride Elevators‘.

In about 100 cities we have completely free mass transit at a muncipal level; some of them are very small municipalities and the biggest one is Talinn”

Prince says in researching the chapter about Montreal’s free-transit movement in the 1970’s, he discovered there are 100 cities in the world that have experimented with the idea.

He says it all began with the example of Bologna, Italy.

Following the Second World War, the city council was keen to engage the citizens and rethink the role of the automobile.

“It was through these public consultations that they embarked on about a year and a half experiment in free public transportation as part of a battery of other things they did to really return the city-centre, this beautiful old city-centre, to the people and to the pedestrians and bicycles and anything but automobiles.”

Prince says it was this model that worked in Bologna that was then exported to many cities around the world, including Montreal, which began pushing the idea in the 1970’s.

The demand for free public transit is renewed now due to the combined developments of growing inequality and urban poverty as well as the climate crisis and the dependence on fossil fuels.

The global leader and great example Prince says is Tallinn, the capital of Estonia.

In 2013 a political party pushed the idea of free public transit for everyone in a referendum, and the results have surprised many people.

“Ironically” Prince says, “the city came out ahead financially because if you’re a resident of Tallinn, you have free public transit so people started moving back to the city, or register themselves as citizens to pay their taxes in Tallinn, so they made money on the deal actually.”

“In about 100 cities we have completely free mass transit at a municipal level; some of them are very small municipalities and the biggest one is Talinn.” Prince says.

Most cities use the move in a targetted way; it may be free for children, or seniors, or during rush hour.

Montreal is having municipal elections on November 5th, and with massive infrastructure construction projects on expressways that have caused major problems for commuters, the time may be right for more experiments with free access to the public transit system.