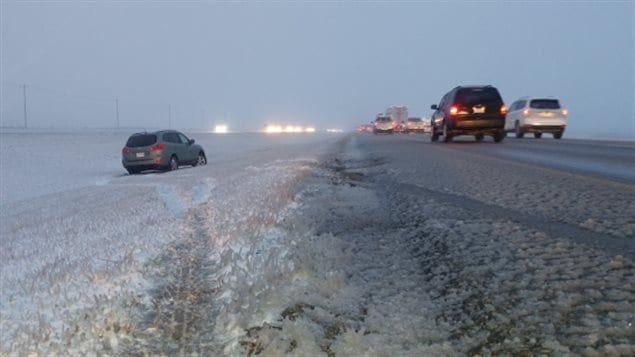 Alberta gets an early glimpse of the near future: it’s white and it’s cold

My heart sank this morning when I saw the news.

Much of southern Alberta was hit Monday with a winter storm, dropping up to 20 centimetres in some areas with winds gusting to 100 km/hour.

For the uninitiated, that’s called a blizzard.

In much of the country, the leaves on the trees are barely turning red, but news reports on Tuesday said, Albertans were busy “digging out,” a phrase that tends to bring–at the very least, consternation–to the souls to all but the hardiest Canadian.

I knew such news was inevitable, but a summer of tennis tends to make one forget–or at least sublimate–well-founded knowledge that winter will, indeed, arrive whether one wants it to or not.

“These strong winds will combine with the falling snow to reduce visibilities in some areas,” said the meteorologists at Environment Canada, well-known masters of understatement

The RCMP warned that travel in southern Alberta was not recommended.

Some didn’t listen, others could not heed the advice, needing to get to their jobs.

Police in Calgary said that between midnight and noon on Monday they responded to 73 vehicle crashes, four of which resulted in injuries.

All this talk is pretty much routine from December to the beginning of April in most of Canada.

Maybe the early Alberta snow had something to do with announcement Monday that the National Hockey League Calgary Flames had signed aging gladiator Jaromir Jagr, the NHL’s second all-time leading scorer behind Wayne Gretzky, to a one-year contract.

The word on the talk shows is that Jagr signed with Calgary because he would finally get a chance to play for an NHL team based in Canada.

Still, snow and hockey go together.

Fortunately for Albertans, the NHL regular season begins on Wednesday.

With files from Canadian Press, CBC