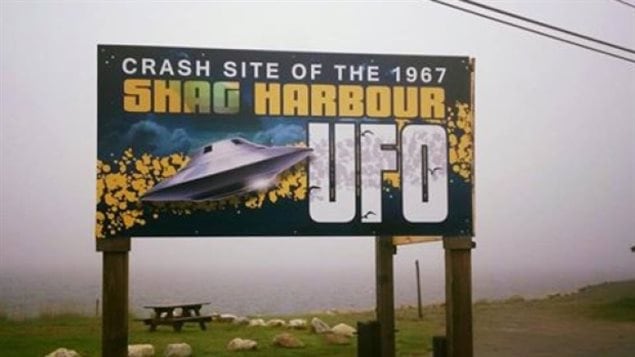 Shag Harbour gets visitors from all over who come to see where an alleged unidentified flying object went in the water back in 1967.
Photo Credit: shagharbourincident.wordpress.com/museum

It was 50 years ago today that very strange things were seen in the skies over Canada’s east coast province of Nova Scotia.

Canadians across the country report lots of strange things in the skies every year, many classed as UFO’s. The incident that occurred in the tiny fishing hamlet of Shag Harbour, however is among the best documented and with a variety of credible witnesses.

The events may have started around 7:15 pm on a scheduled passenger jet outward bound from Halifax as it flew at 3600 metres over eastern Quebec. The pilot and copilot saw a very strange object flying beside them a few miles away. A few minutes later there was what appeared to be two explosions around the brightly lit craft, the second fading to a blue cloud around the object.

Several other reports that evening from Halifax, Mahone Bay, and fishermen offshore reported a variety of strange objects in the sky.

Then just after 11 pm several people around Shag Harbour including police, reported a large low flying object with flashing lights whoosh over the town and hit the water about 300 metres off shore. It floated awhile as a group onshore watched the “orange ball” bobbing in the waves,  and then slipped beneath the surface.

At first emergency services were called as people thought it was a plane crash of some kind.

Rescue boats came quickly but no wreckage was found and no bodies. Navy divers were later called in but say no evidence was found on the sea floor.

Some don’t believe that, and one UFO investigator claims to have found evidence the Navy traced the UFO to a secret US naval base on the Nova Scotia coast about 25 kilometres away.

Still, 50 years later the well-documented sighting remains a complete mystery.  It has benefitted the hamlet of Shag Harbour though, as it has become a bit of a tourist attraction and a UFO festival is being held there on this 50th anniversary.