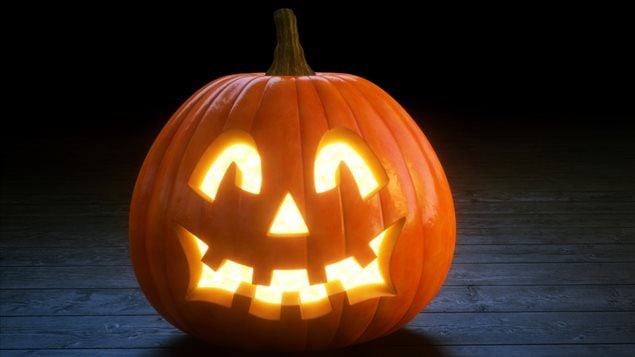 This is a typical carved Halloween pumpkin- or "Jack-o-lantern". It is hollowed out with a face cut into it so the candle or light shines through in the dark of evening. In Ontario, pumpkin carving has been taken to a new and unbelievably complex artistic level at a heritage park.
Photo Credit: via CBC

In recent years some talented people have taken the typical Hallowe’en pumpkin carving (jack-o-lantern) to a new and artistic level.

This year however, an historic site in Ontario has set a whole new standard in artistic carving.

It’s called “Pumpkinferno”, and it’s a display of incredibly intricately carved pumpkins at Upper Canada Village.  The site is a recreated 19th century village which has had a number or heritage buildings relocated to the park in Morrisburg Ontario, and is operated by the St Lawrence Parks Commission.

Pumkinferno which started in September and continues until Hallowe’en, October 31, is an annual outdoor event featuring about 7,000 pumpkins in a variety of displays along a meandering path about a kilometre long through the heritage park.

However, given the vagaries of weather, and nature’s own effect on fruit and vegetables sitting around exposed to the air and time, the pumpkins used to create the displays are made out of molds of actual pumpkins.

The park has seen record attendance for the event as the autumn weather has so far been extremely mild, and thus inviting for people to make the trip to the park in eastern Ontario, along the St Lawrence shore.

The recent weather conditions however, are not reflective of a rather cool and wet summer which meant that farmers growing actual pumpkins had a less than ideal crop.

As for the displays however, most visitors make ample use of superlatives to describe the amazing displays.